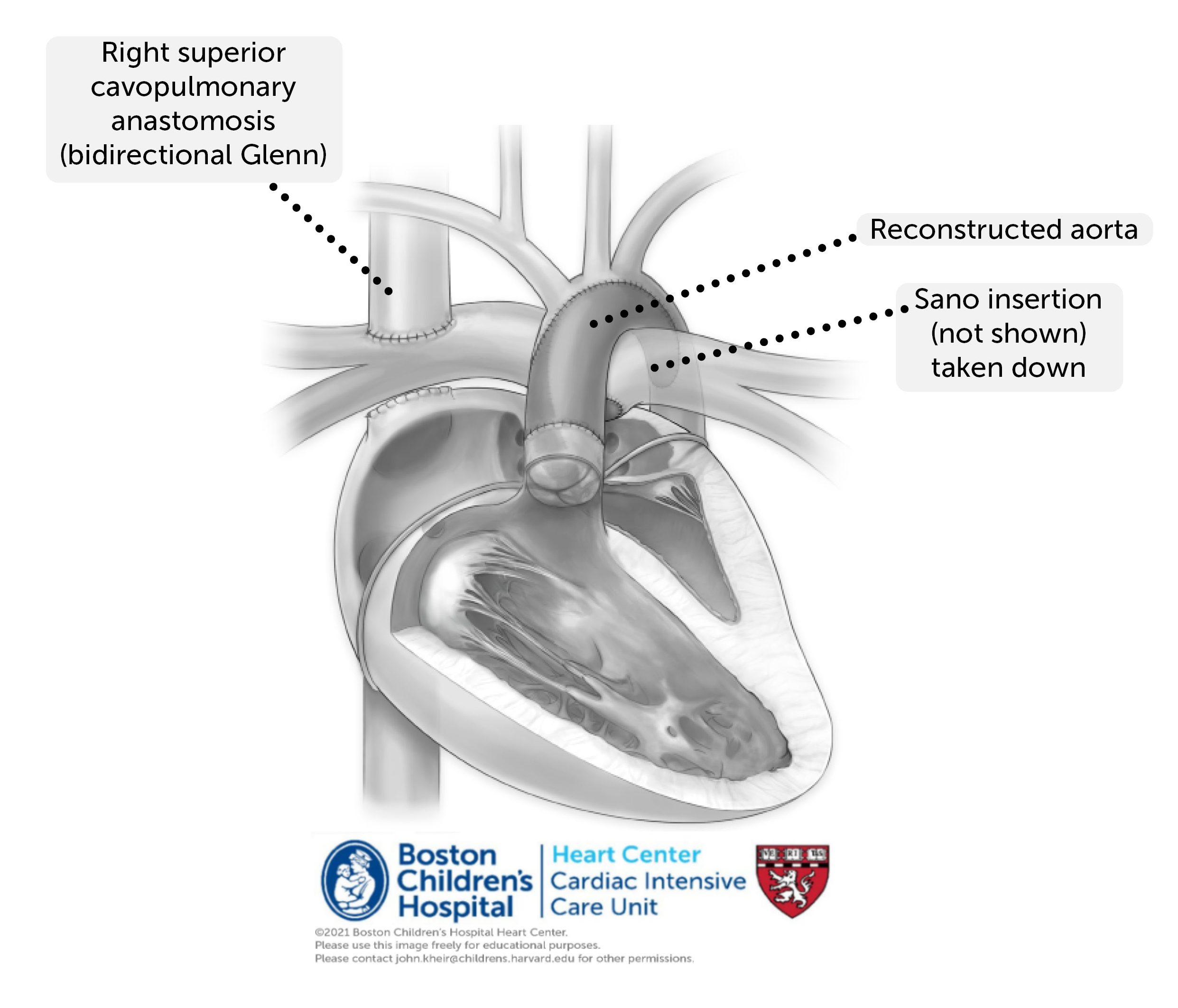 Overview. The bidirectional Glenn procedure may follow S1P or hybrid procedure (for HLHS), a BTS or PDA stent (for critical right heart diseases, such as PA/IVS or critical PS), a PAB in other single ventricle diseases, or may be the initial operation in cases of single ventricle heart diseases that were sufficiently balanced in the newborn period. In many cases, the Glenn represents a stabilizing palliative operation in which the circulation is no longer a parallel one (since the Sano or BTS is taken down as part of it, and pulmonary blood flow becomes passive). In other cases, the Glenn shunt may be used to decrease the volume load of a restrictive RV, as in left dominant CAVC or severe Ebstein’s anomaly. Clinically, the timing of the BDG procedure is often determined by the growth and arterial saturations of the patient. In most cases, PBF prior to the BDG occurs through a fixed resistor (e.g. shunt, PAB, or bulboventricular foramen). As the patient grows, this resistor becomes increasingly restrictive relative to the combined cardiac output of the circulation, causing the saturations to decrease. Though there are many factors that determine the precise timing of surgery, generally the Glenn is performed when the patient is 4-6 months of age and/or has saturations significantly below 80%.

Preoperative evaluation. Prior to the BDG, it is important to ensure that the patient will have sufficient PBF to sustain oxygenation and ventilation and avert severe systemic venous hypertension. In most cases, this involves hemodynamics and angiography from cardiac catheterization, often a lung scan, and sometimes an anatomic evaluation by cardiac MRI.

Risk factors for a complex course following BDG may include moderate or severe AVVR, severe ventricular dysfunction, prolonged hospitalization following S1P, and age <3 months at BDG. It is not clear that TVplasty at the time of BDG significantly modifies this risk. Postoperatively, dead space fraction >0.3 is associated with need for reintervention prior to hospital discharge.

Cardiac catheterization remains a cornerstone of preoperative evaluation and treatment prior to the BDG.

Procedure. The BDG procedure itself is relatively simple. The SVC is divided from the RA above the SA node and anastamosed end to side on the RPA. In the setting of PA hypoplasia, the PAs may be augmented using patch material. In the setting of codominant bilateral SVCs, bilateral BDG can be performed. Alternatively, the LSVC may be ligated if the RSVC is dominant and a bridging vein is present. AVVplasty may be performed if significant AVVR is present preoperatively.

The bidirectional Glenn operation: A risk factor analysis for morbidity and mortality