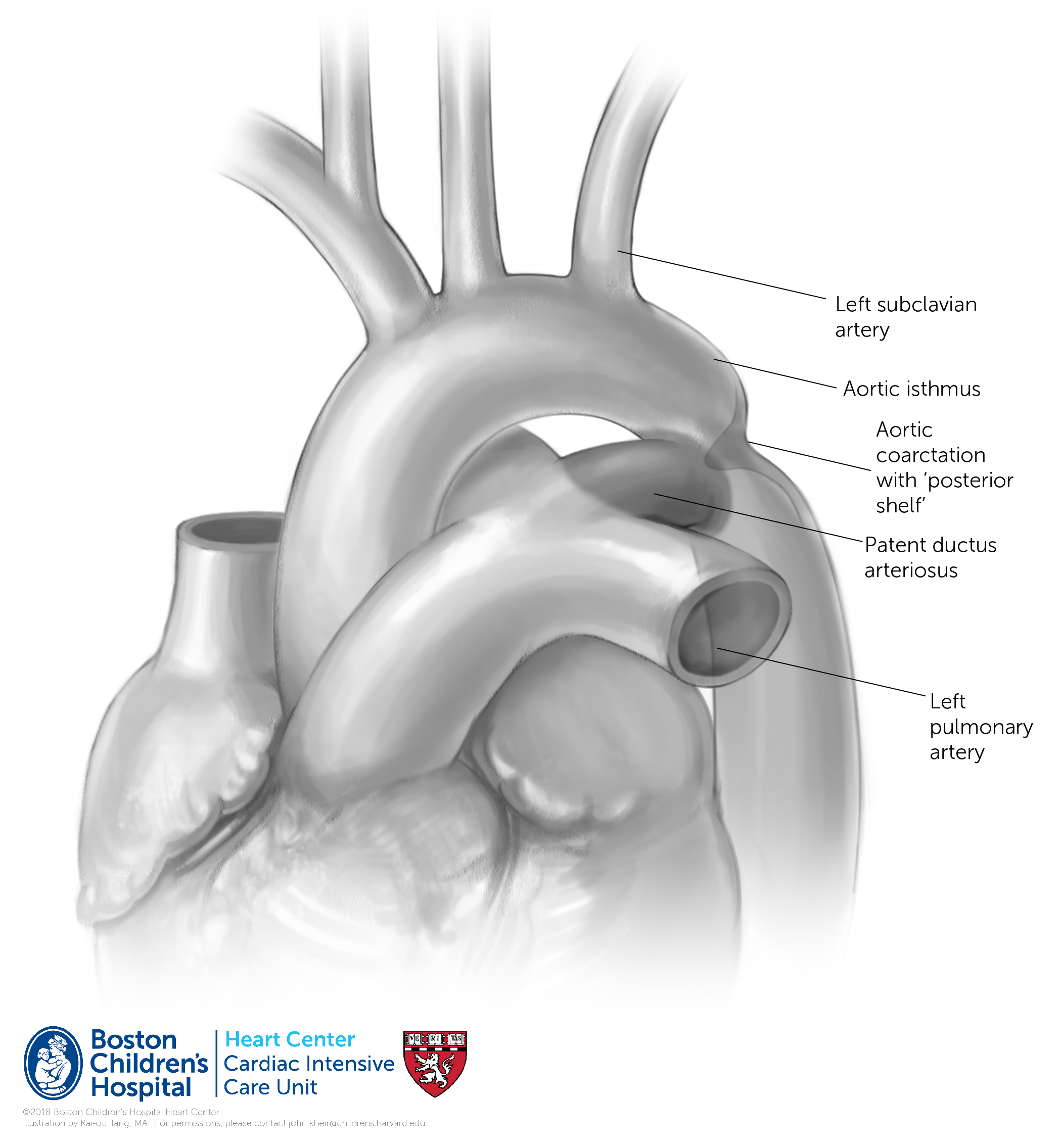 Patients with coarctation of the aorta and no other associated cardiac anomalies are said to have an ‘isolated CoA’ (coarctation of the aorta).  Like every heart disease, CoA is a spectrum that can range from mild to critical; a critical coarctation is purely defined as one that is dependent on the presence of a PDA for flow to the lower half of the body to be patent.   The presence of a PDA permits a pathway for blood to pass ‘around’ the coarctation, which is really a involution of scar tissue at the aortic isthmus.  In the presence of a VSD, blood flow into the aorta is disfavored (higher resistance of the aortic circulation with a ventricular level shunt –> more left to right flow in the ventricles), predisposing to more diffuse arch hypoplasia, or even an interrupted aortic arch (IAA).  Alternative arch anatomies include a ‘bovine’ arch and aberrant right subclavian artery (seen below). 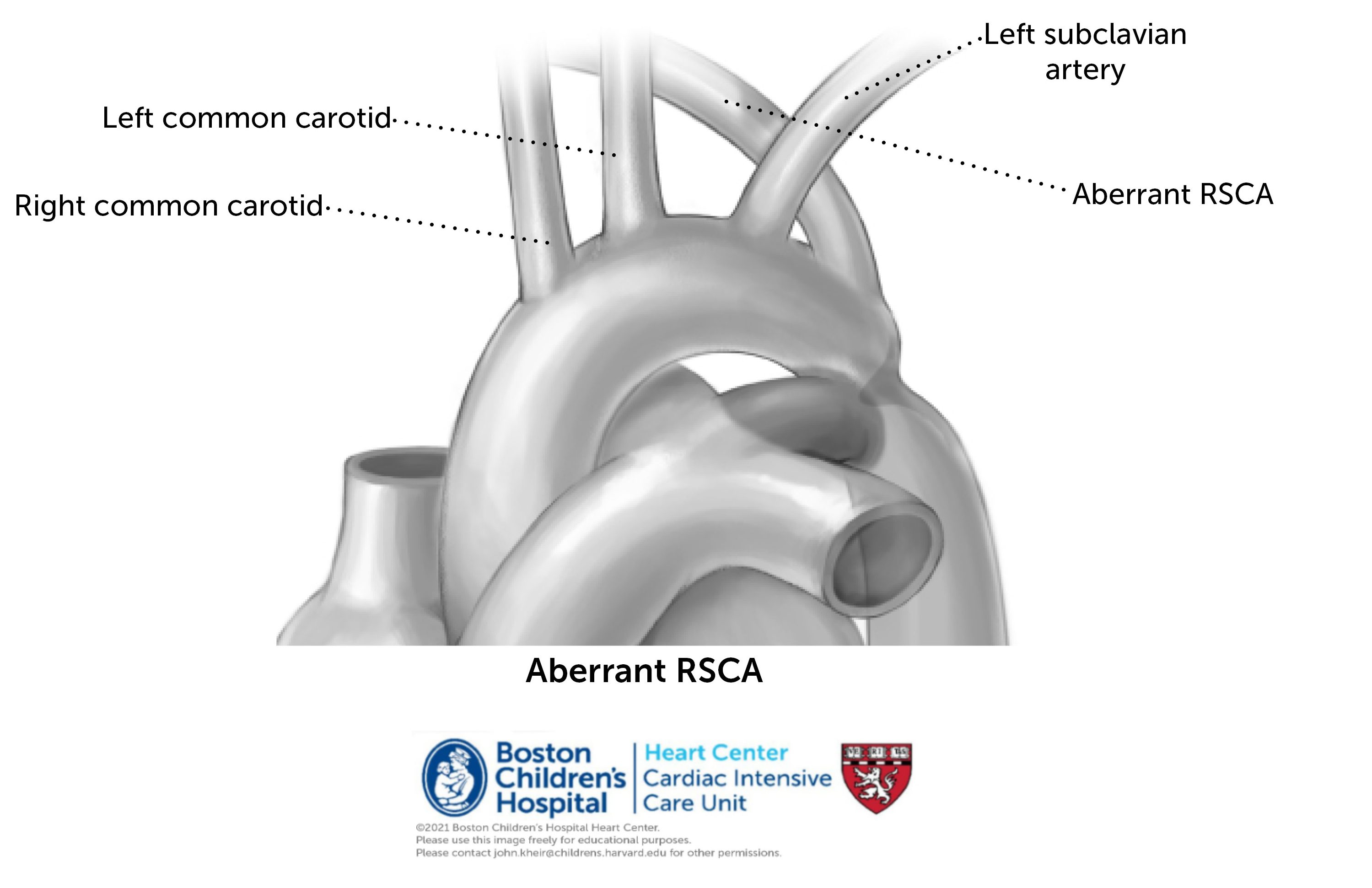 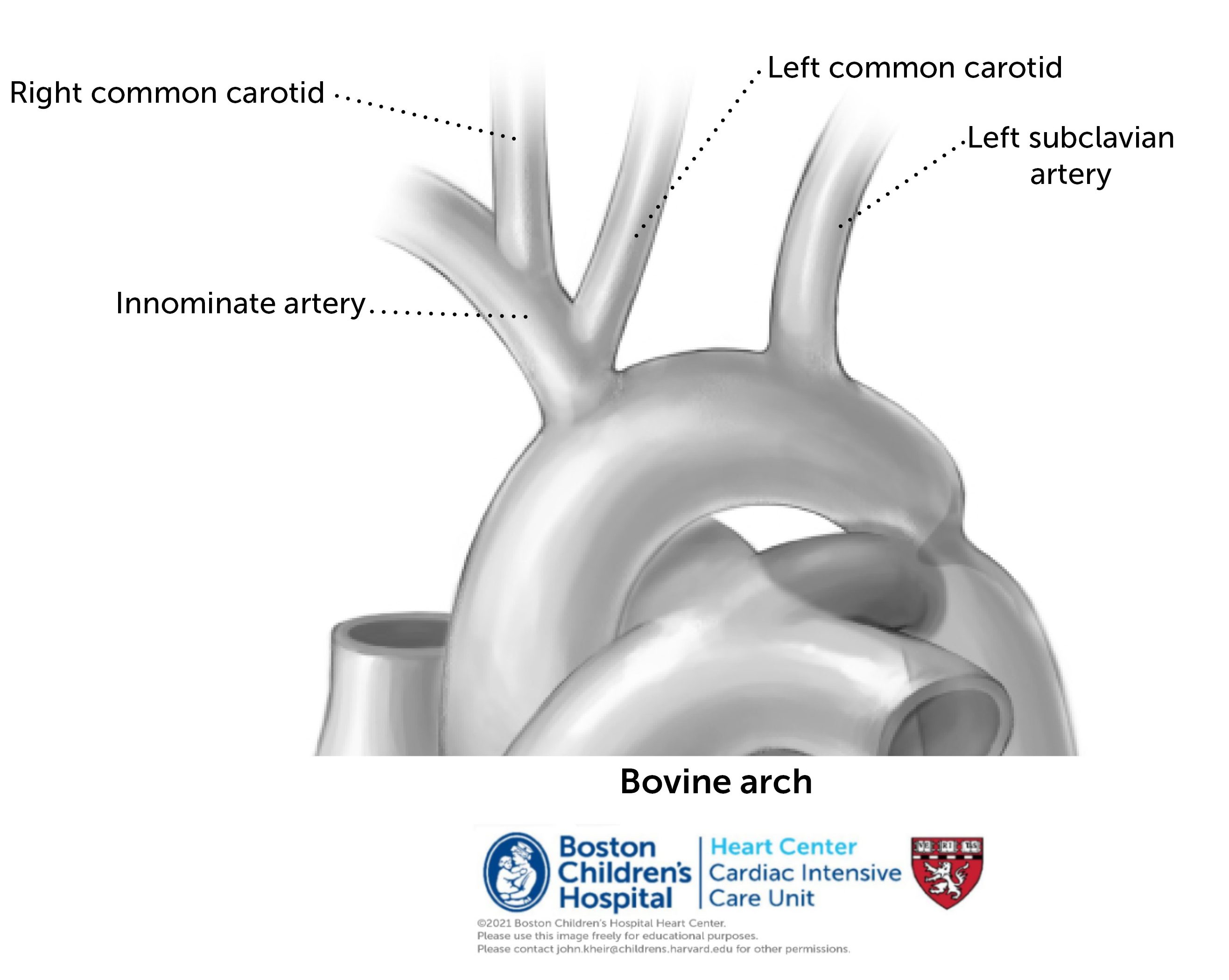 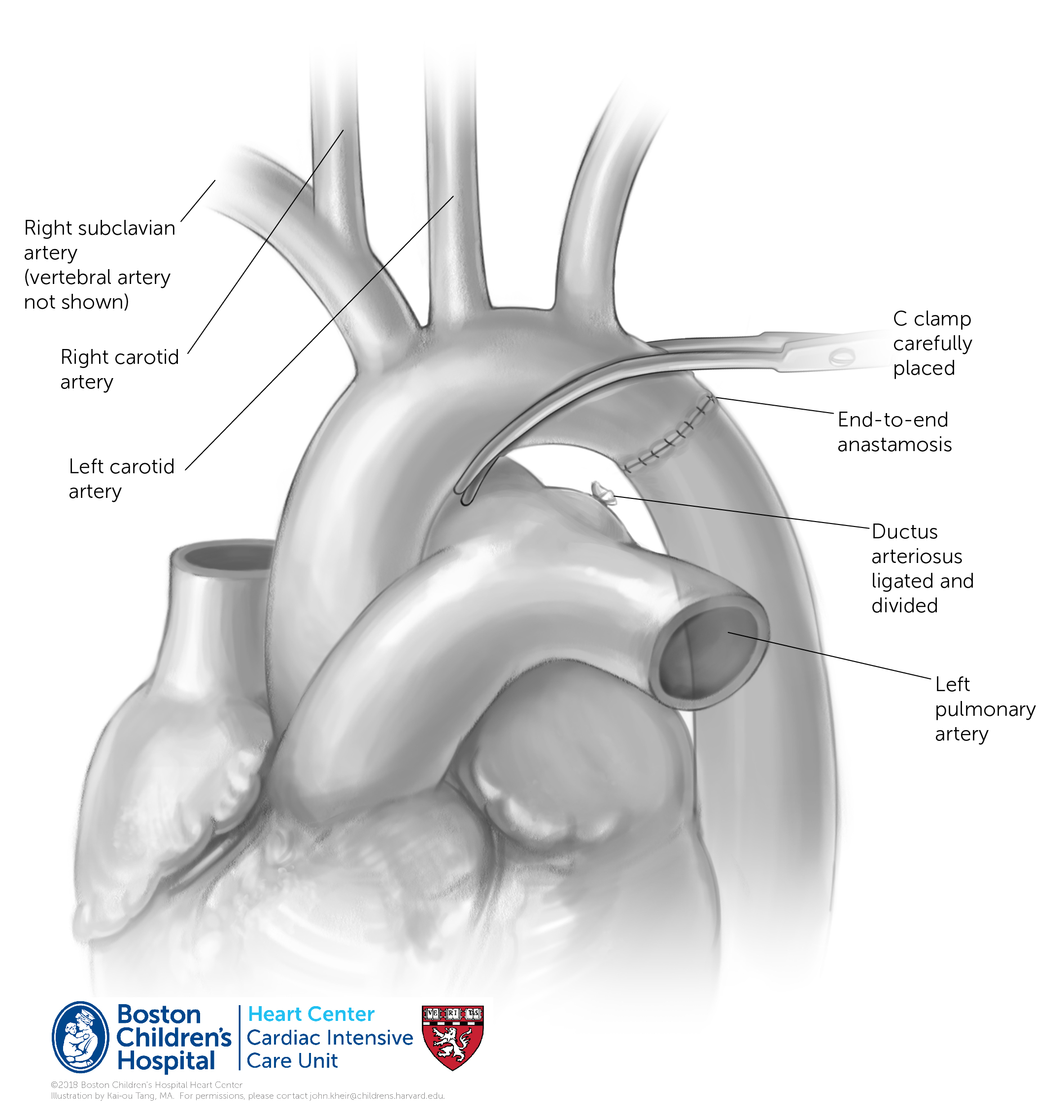 If there are no complicating comorbidities or anatomic considerations (e.g. RAA), a coarctation resection (i.e. coarctectomy) is often performed without cardiopulmonary bypass via lateral thoracotomy.  The transverse aorta is cross-clamped with care to ensure antegrade blood flow into all of the brachiocephalic arteries.  The coarctation is resected entirely with the ductus, which is ligated and divided on the pulmonary end.  At times the left subclavian artery is ligated and divided to help mobilize the aorta to decrease tension on the suture line.  Rarely, the left subclavian can be used as a flap to augment the aortic isthmus.  Generally, the aorta is cross-clamped for 15-30 minutes for the procedure, which takes place at ~33-35°C (ambient cooling only).  Blood flow to the brain is antegrade, to the spinal cord is through vertebral and intercostal arteries.  Postoperative gradient is assessed by echo, and often by comparison of a right radial arterial line with lower extremity cuff BP.  Four extremity BPs should be performed postoperatively on a regular basis particularly in patients who are not doing as expected.  Rarely, residual ductal tissue may cause a recurrent coarctation.  Injury to the thoracic duct, recurrent laryngeal nerve (vocal cord function), and vagus nerve are possible and should be monitored for.

Often, the transverse aortic arch is sufficiently hypoplastic that it would cause a gradient following a traditional ETEA.  Such cases may be associated with a VSD (as shown), in which case they would necessarily be repaired using CPB.  In the absence of a VSD, a CoA with hypoplastic transverse arch may be repaired via thoracotomy (‘from the side’) with clamp placement as shown.  This procedure differs from a simple ETEA in that the underside of the aortic arch is incised and augmented using the oblique incision of the descending aorta. 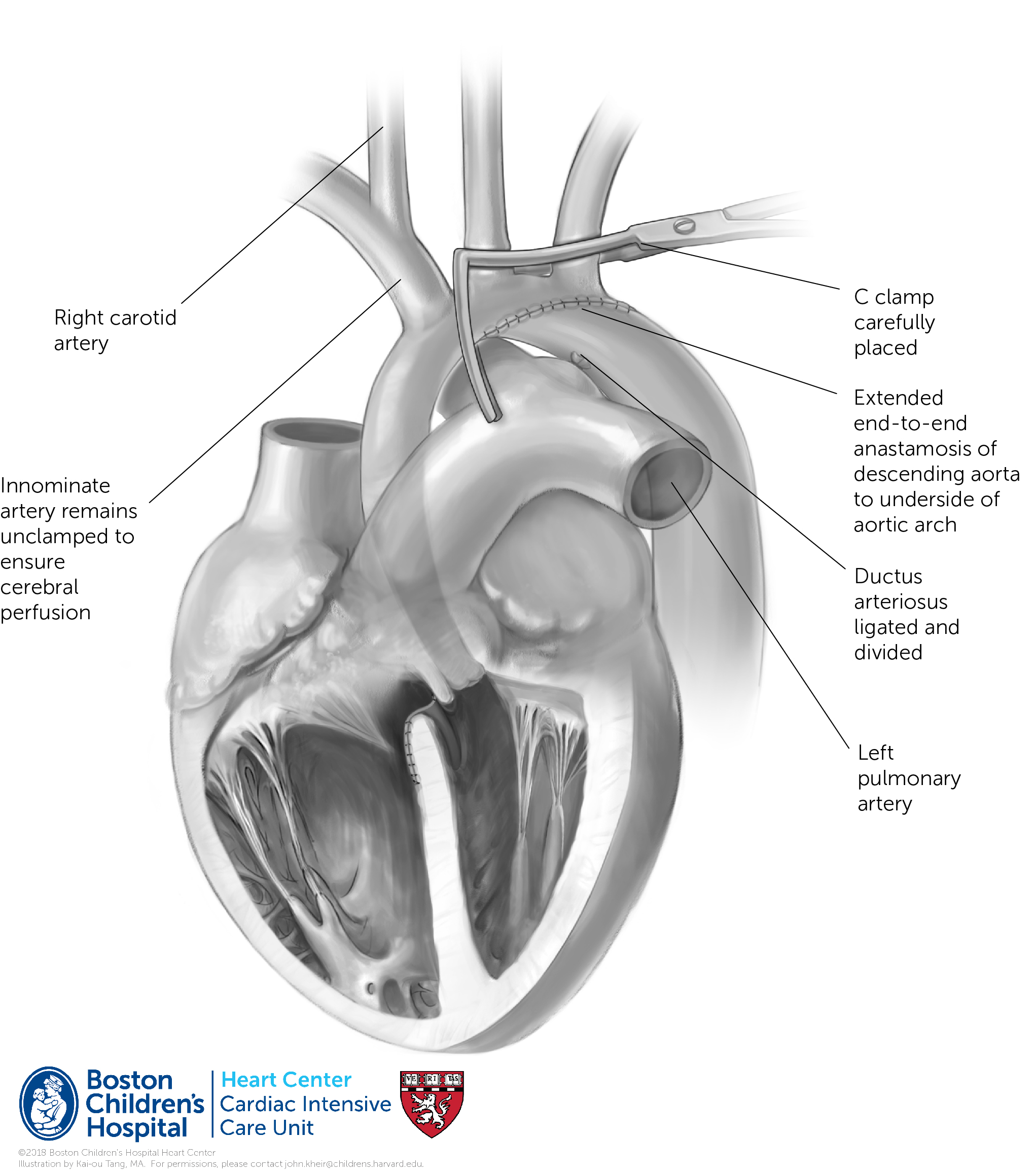