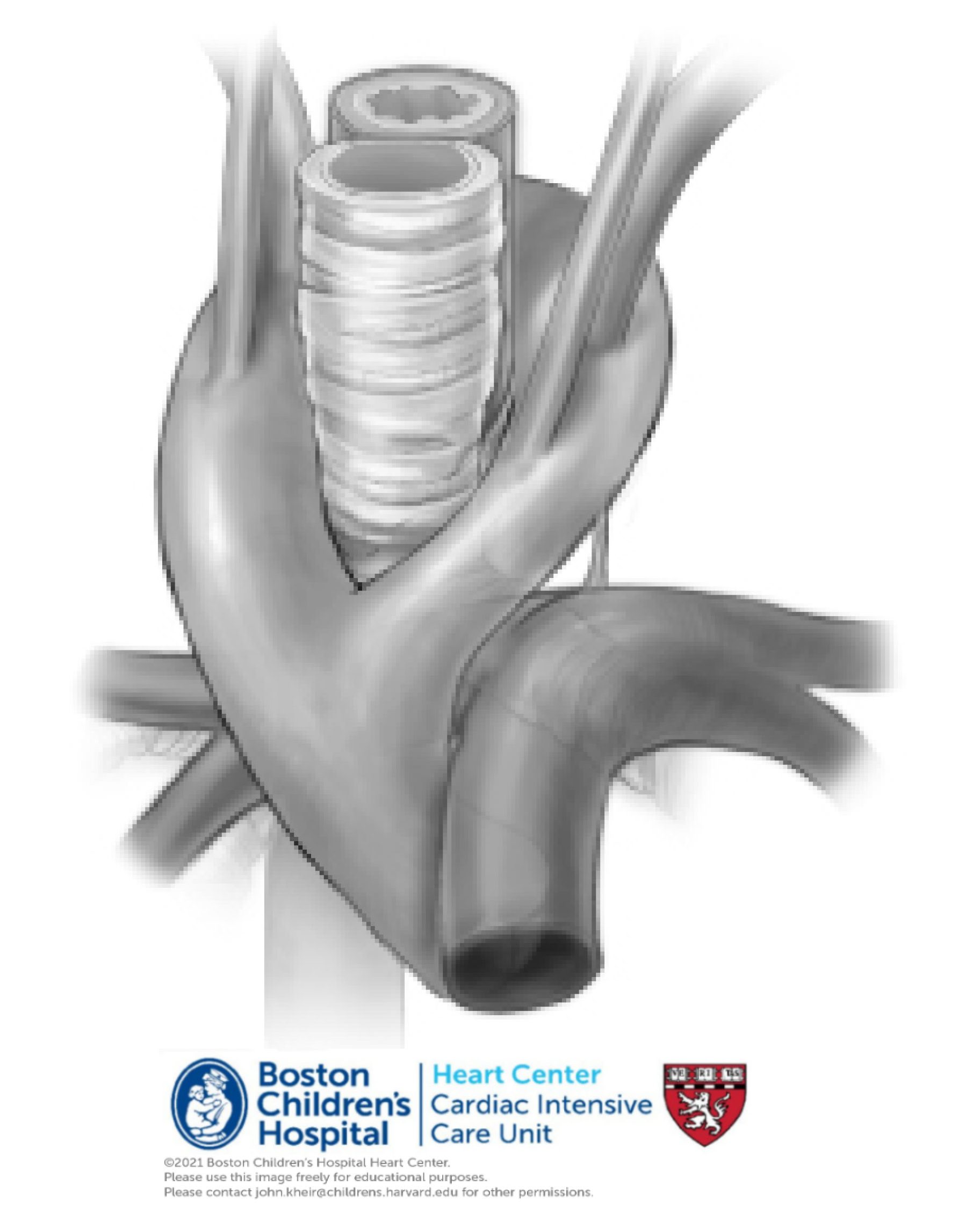 Both the right and left embryonic dorsal aortae persist. A complete tracheoesophageal ring is formed by the two arches, which arise from the ascending aorta, pass on either side, and join posteriorly to form the descending aorta. The RAA is dominant in 75% of cases, and there may be an atretic segment with ligamentous continuity. Treatment is typically division of the non-dominant arch and ductal ligament. 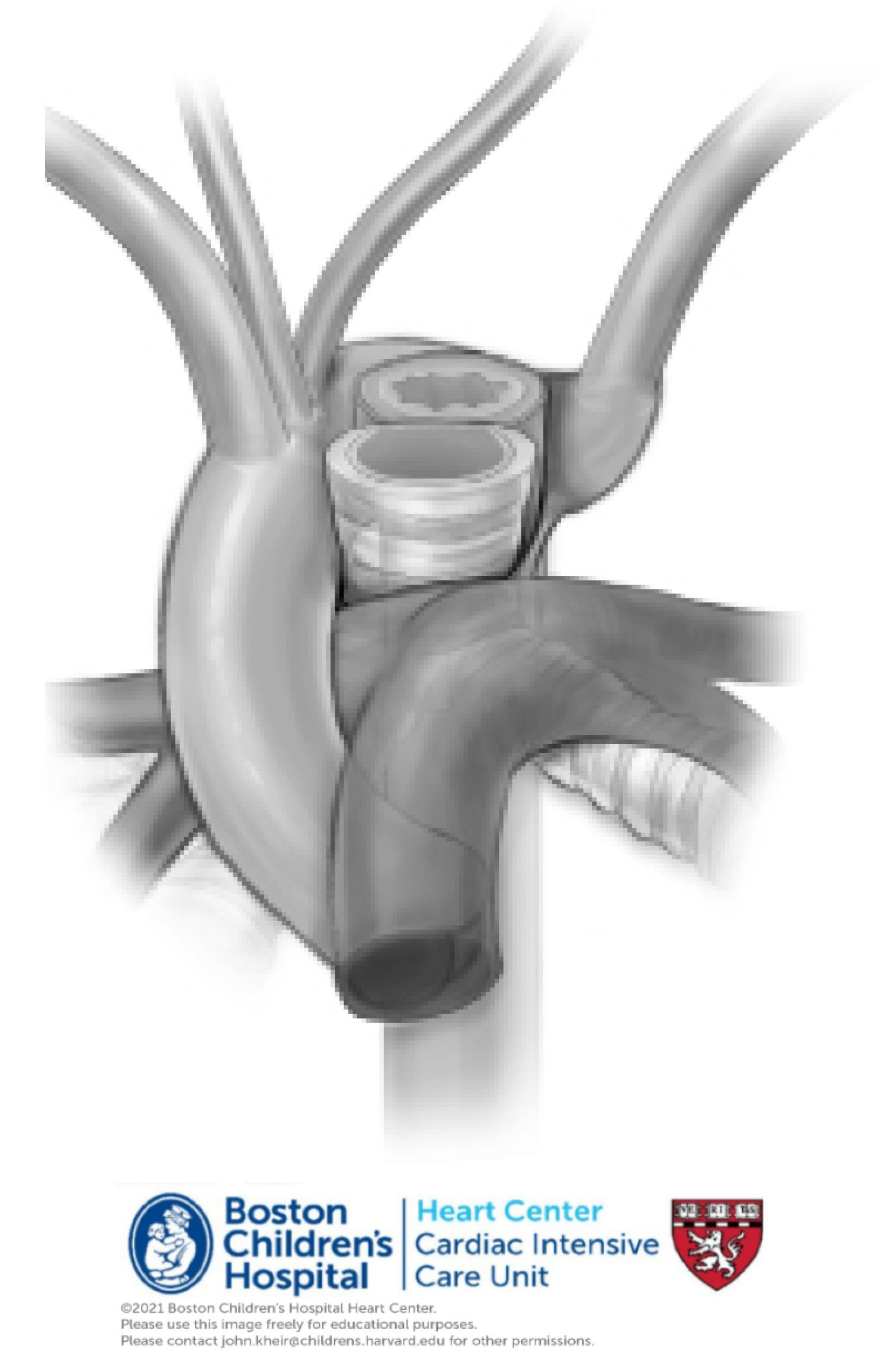 The aortic arch drapes over the right MSB (defining RAA) and the left subclavian takes an abnormal course, with its origin from a diverticulum of Kommerel (bulbous dilation at the base of the left, a remnant of the left dorsal aorta), passing behind the esophagus. The left ductal ligament from the diverticulum completes the tracheoesophageal ring. Treatment includes division of the ligamentum, and may include resection of the diverticulum and ligation or reimplantation of the LSCA. 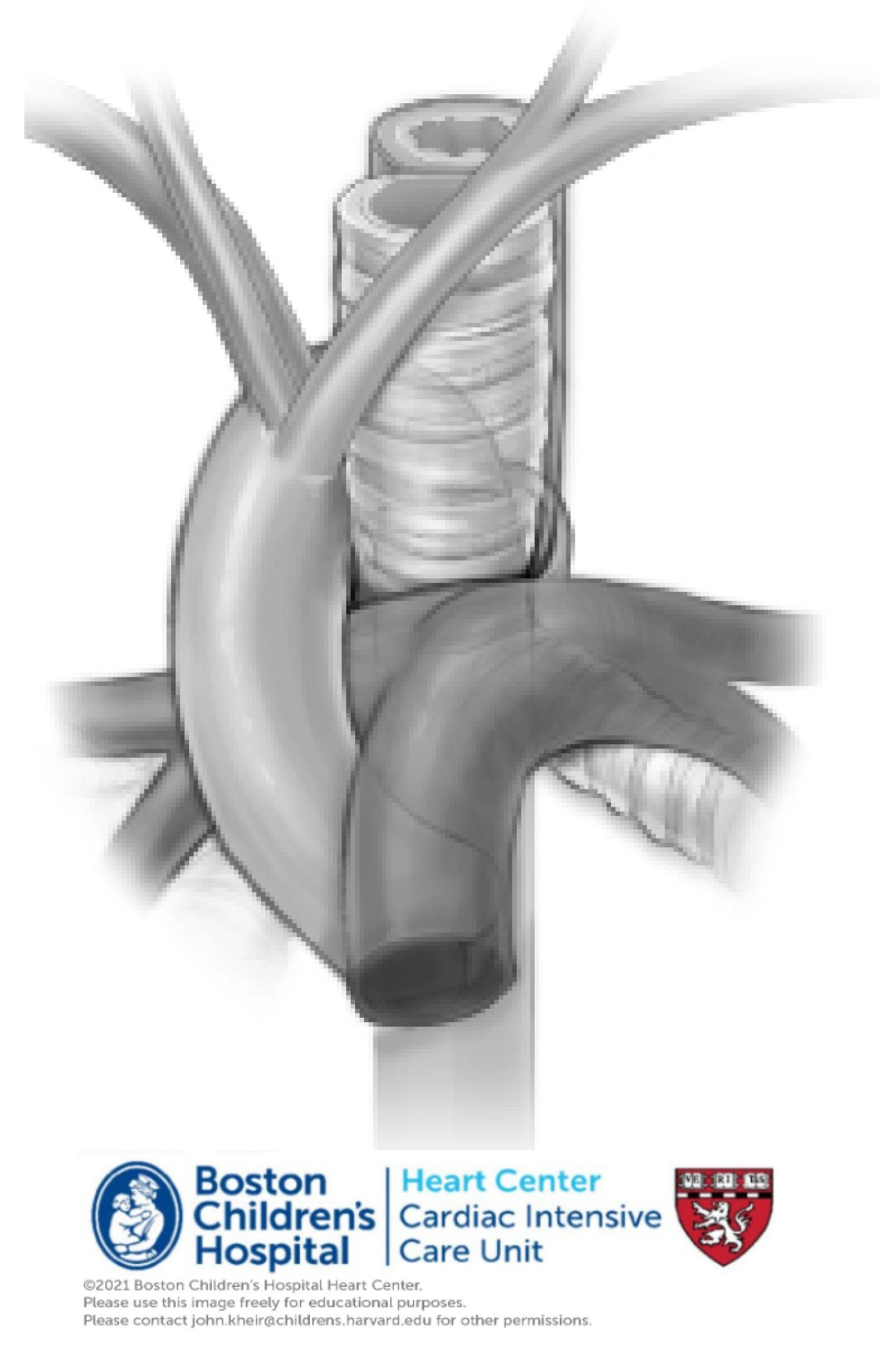 A complete ring is formed around the trachea and esophagus by the RAA, retroesophageal ductal diverticulum and left-sided ductal ligament. Treatment includes division of the ductal ligament.

Sometimes called circumflex (retroesophageal) aortic arch. The trachea and esophagus are encircled by the right aortic arch, retroesophageal right-sided dorsal aorta, and left-sided ductal ligament. Unlike in a typical right aortic arch (in which the aorta crosses over the RMSB and descends to the right of the spine for some distance before gradually crossing to the left of the spine around the level of the diaphragm), the aortic arch here immediately crosses over the spine posterior to the esophagus (and immediately gives rise to the ductus arteriosus). 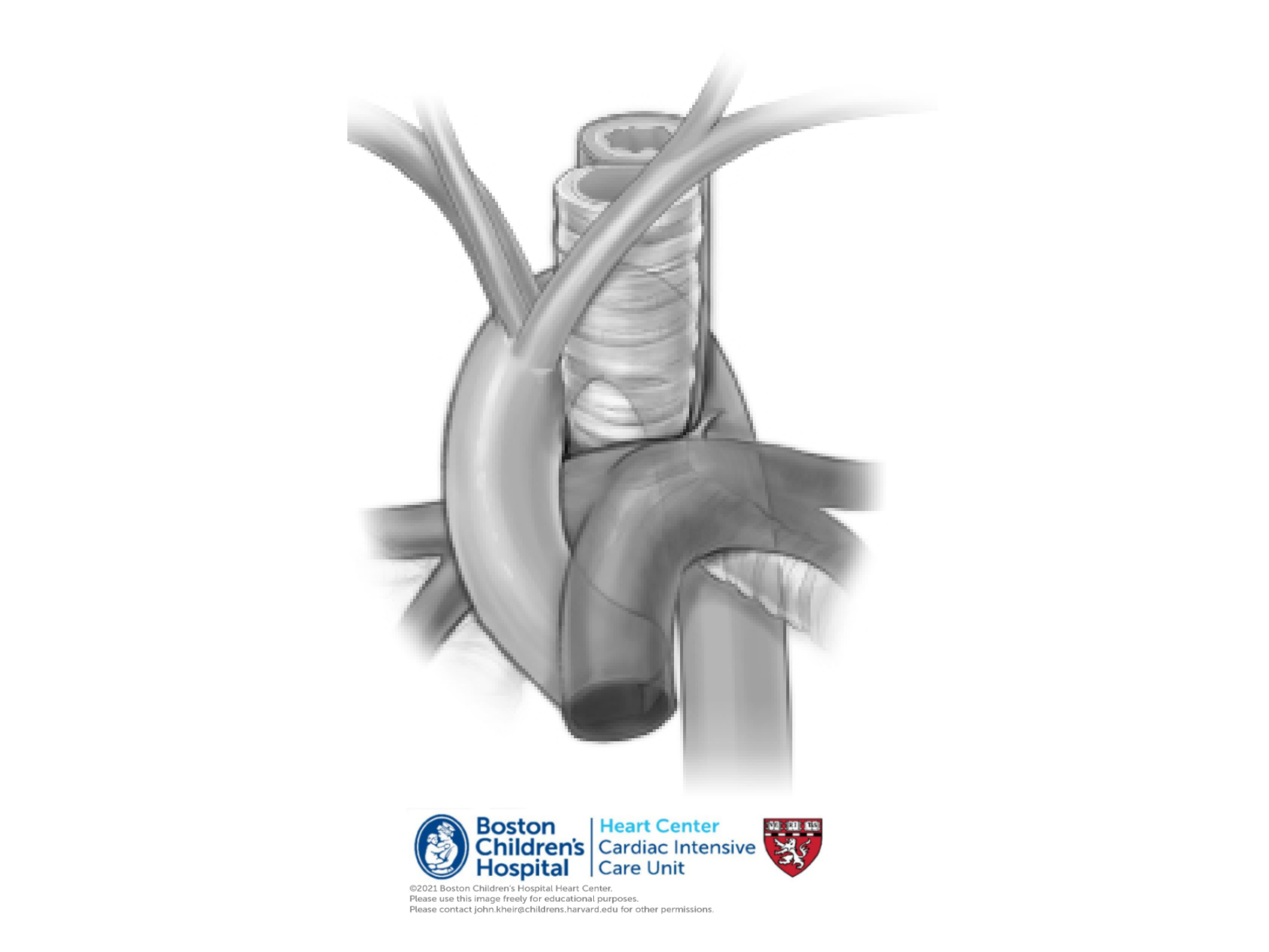 Treatment. The definitive treatment for this defect is an aortic uncrossing procedure. On CPB, the aortic arch is mobilized, the transverse arch is transected, uncrossed, and brought anterior to the trachea as shown. The trachea and esophagus may be pexied posteriorly to improve short term malacia. 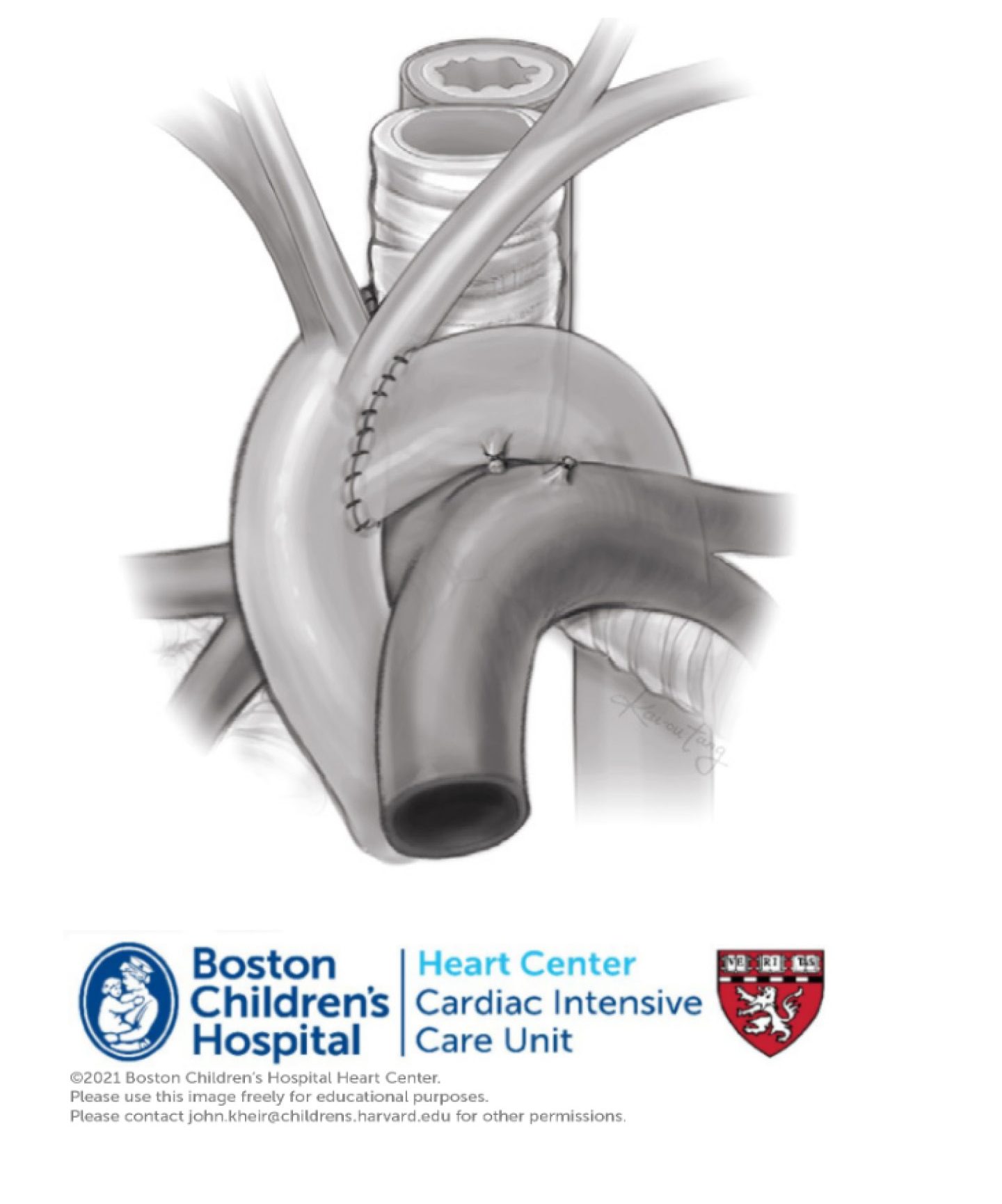 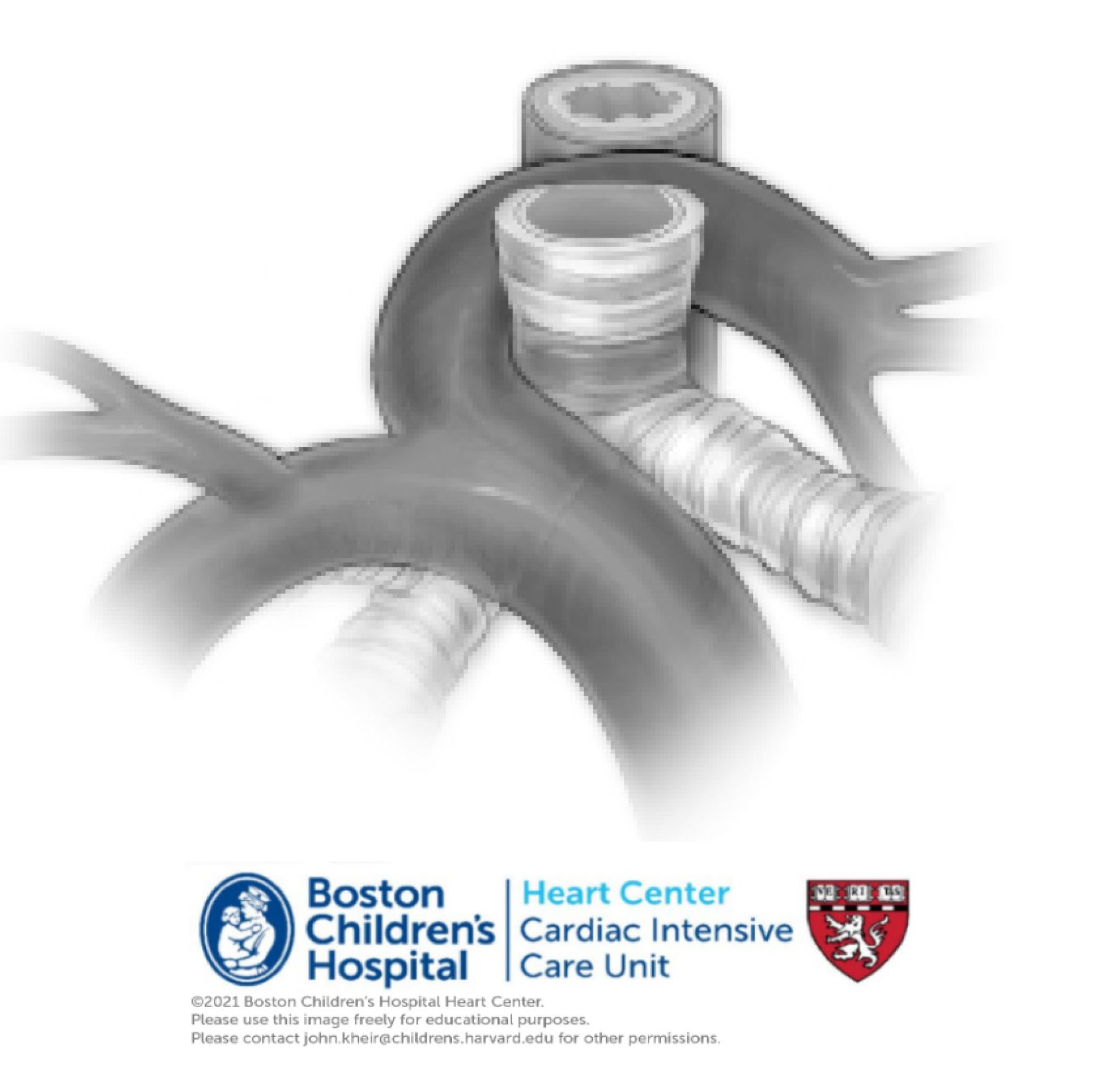 The LPA originates from the transverse portion of the RPA to the right of the trachea, coursing behind the RMSB and trachea but anterior to the esophagus. The ductal ligament may be to the left of the trachea, connecting the descending aorta to the distal MPA. This anatomic arrangement causes constriction of the RMSB and/ or trachea. Commonly, there are associated complete cartilaginous tracheal rings (i.e. ring-sling complex). In other cases, there may be a complex including a hypoplastic or absent distal RPA, right lung hypoplasia or agenesis, and atrial and ventricular septal defect.