Anatomy
A partial AV canal defect includes an ostium primum ASD and cleft mitral valve and there is no VSD component. In a transitional AV canal, the superior and inferior bridging leaflets are often heavily adherent to ventricular septum, which limit flow through the inlet VSD (i.e. the VSD is made restrictive). Because the AVV is common, the aorta is anteriorly displaced (the AVV occupies the space normally occupied by the LVOT) and subaortic obstruction can develop over time.
Pathophysiology
The pathology of a transitional AVC is primarily related to the primum ASD. Assuming both ventricles are balanced (of equal end diastolic volume), this causes left to right atrial level shunting and right ventricular volume load (the RV pumps all blood that crosses the mitral valve and that which shunts left to right at the ASD). This also causes pulmonary overcirculation, though this is generally medically manageable in most children. In some cases, there is significant ‘mitral’ (or left AVV) regurgitation, often due to a deficient superior bridging leaflet, which can exacerbate heart failure. Absent significant symptoms, the defect is repaired at 6-12 months of age. A small subset of patients present with heart failure in the first year of life due to small left heart structures and coarctation.

Anatomy
A complete AV canal defect includes an ASD1 (persistence of ostium primum), a common AV valve (rather than separation of the tricuspid and mitral valves), and inlet VSD. ‘Balanced’ means that the common AV valve is equally apportioned so that the right and left ventricles are approximately the same volume. The inferior bridging leaflet consistently has chordal attachments to the ventricular septum. Superior bridging leaflet (SBL) varies as follows:
Rastelli type A (majority): SBL natively attaches to the ventricular septum; most commonly associated with LVOTO.
Rastelli type B (rarest): SBL attaches to an RV papillary muscle.
Rastelly type C (most common in T21): SBL is free-floating and unattached to ventricular septum.
Pathophysiology
The physiology of an unrepaired balanced AVC is primarily determined by the degree of AVVR, the size of ASD1, and the degree of coverage of the VSD by AVV chordal attachments. Patients with moderate or more AVVR, a large ASD1, additional ASDs, or a large VSD will exhibit left or biventricular volume overload and may have some degree of heart failure. Low birth weight or preterm infants may exhibit heart failure at <1 month of age, though generally defects are repaired electively at 2-6 months of age. Symptoms are often managed with diuretics and ACEI. Some patients present with respiratory insufficiency in the setting of respiratory infection.

Anatomy
The spectrum of right dominant CAVC ranges from mild right dominance (with a clear pathway to a biventricular repair at the usual 2-6 months) to a severely hypoplastic LV, AV and aorta that can only be palliated down a single ventricle pathway. The key determinants include (1) size of LV (including whether it is apex-forming), (2) spacing of the LV papillary muscles, (3) LVOTO, and (4) size of AV and aortic arch. Patients with arch obstruction, a non-apex forming LV and a single LV papillary muscle are likely to proceed down a single ventricle pathway, at least initially.

Pathophysiology
Patients with an unrepaired right dominant CAVC are at risk for systemic hypoperfusion, pulmonary overcirculation and heart failure due to a large VSD combined with a variable degree of obstruction to systemic blood flow. AVVR may also occur due to asymmetric attachments of the SBL to an off-center ventriclar septum, which may worsen heart failure symptoms. If a CoA is present, an initial palliation may include CoA repair and placement of PA band. In other cases, a full S1P is required due to LV or aortic valve hypoplasia and LVOTO. Whenever possible, intervention on the AVV itself is avoided in the newborn period due to friability of neonatal valve tissue.

Anatomy
The spectrum of left dominant CAVC ranges from mild left dominance (with a clear pathway to a biventricular repair at the usual 2-6 months) to a severely hypoplastic RV that may or may not support a 1.5 ventricle repair.

Pathophysiology
Patients with an unrepaired left dominant CAVC are generally symptomatic in proportion to the degree of AVVR. In severely unbalanced CAVC, the AVV leaflets may remain largely unsupported and lead to AVVR. Pulmonary hypoplasia is rare except when CAVC is combined with TOF, DORV or heterotaxy.
Following repair, patients may exhibit restrictive RV physiology; leaving a fenestrated atrial septum allows right to left atrial ‘pop-off’ the preservation of cardiac output with mild hypoxemia, and lowers the risk of severe right atrial hypertension. Patients should be closely monitored for signs of RV failure and atrial HTN, including hepatic distension, hypoglycemia, ascites, and renal insufficiency. Patients in whom the RV is significantly limiting may be left with either a larger atrial fenestration or a BDG; in either case, the RV contributes a partial cardiac output. In the case of a BDG, the patient may be fully saturated if no RtL atrial shunt is present

Anatomy (see below)
Subaortic obstruction may form in patients with CAVC and significant attachment of the SBL to the crest of the ventricular septum, which tethers the SBL in an elongated position. Blood exiting the LV often accelerates as it passes anterior to the SBL, causing turbulent flow in the LVOT that is the stimulus for the formation of a subaortic membrane. Patients with a Rastelli type C valve (typically T21) lack such attachments and less commonly develop subAS. LVOTO also increases LVSP and may exacerbate the development of MR. 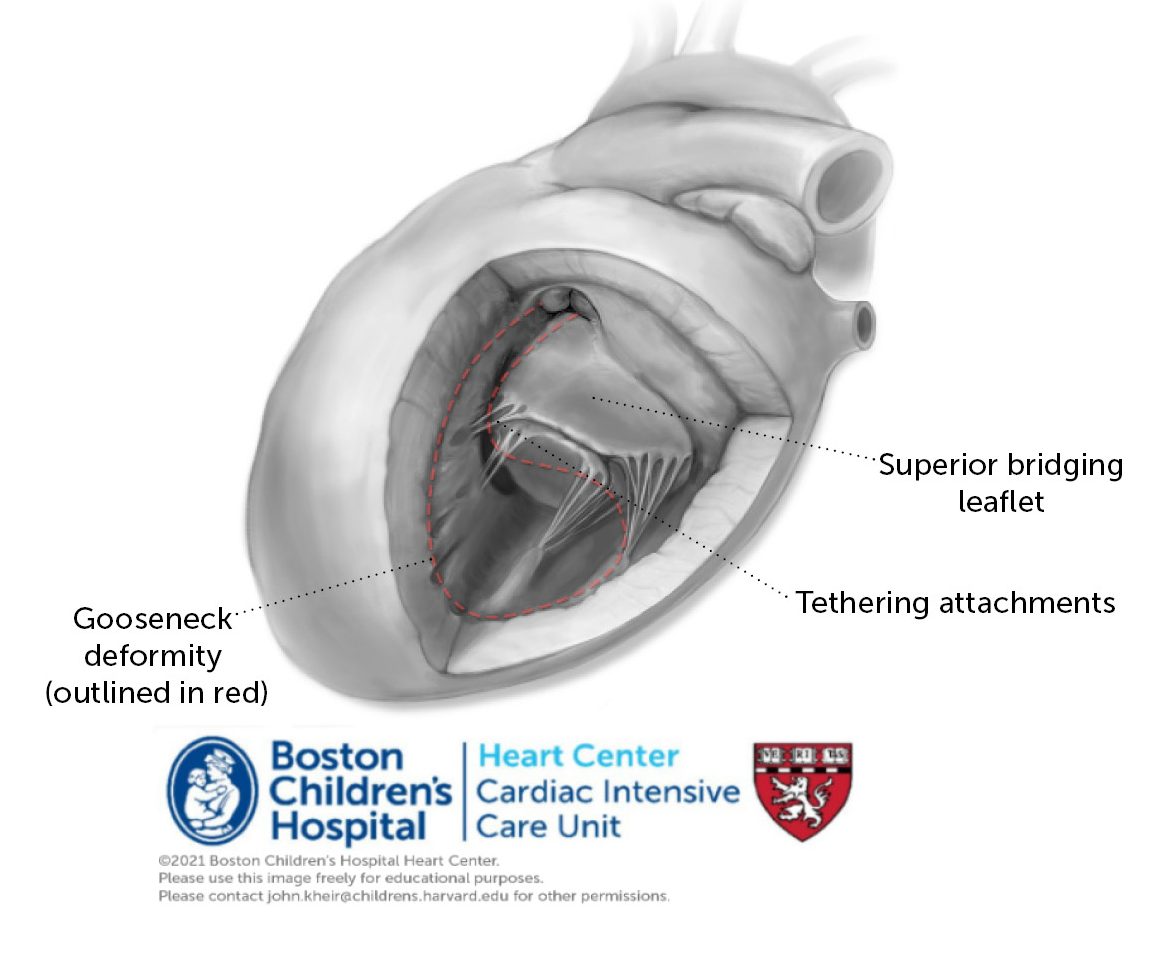 Repair and postoperative considerations
Resection of the subaortic membrane is typically performed via transection of the aorta through the AV, and is typically acutely successful in relieving obstruction (see above). Following removal of the pressure load, patients are often hypertensive and the ventricle appears hyperdynamic. Treatment with beta blockade to diminish this response is common, though achieving a normal blood pressure for age is challenging. Patients with significant AVV work performed in the same operation merit close attention to BP control. LBBB may result from injury to the left superior bundle of His, which approximates the subaortic region in the ventricular septum.

Anatomic considerations
Repair of the mitral valve (properly, the left AVV) is the Achilles heel of CAVC repair. Its causes can be multiple. (1) The SBL may be tethered to the septum, limiting coaptation. This is a common mode of failure in partial and transitional AVC valves. (2) The annulus may be dilated, causing central non-coaptation. This can be addressed by annuloplasty or by further restricting the anterior-posterior dimension of the inlet septal defect, bringing the IBL and SBL closer together. (3) A residual cleft may cause regurgitation, which may be addressed primarily. (4) A deficient lateral leaflet may require that the AVV cleft be left open to allow a sufficient mitral inflow area (with obligate MR). Many such valves also exhibit some degree of MS. (5) The MV may have a narrowly spaced papillary system that causes poor leaflet mobility. In all cases, MR create a volume load that stretches the MV annulus and worsens MR. SubAS may also increase LVSP and worsen MR. 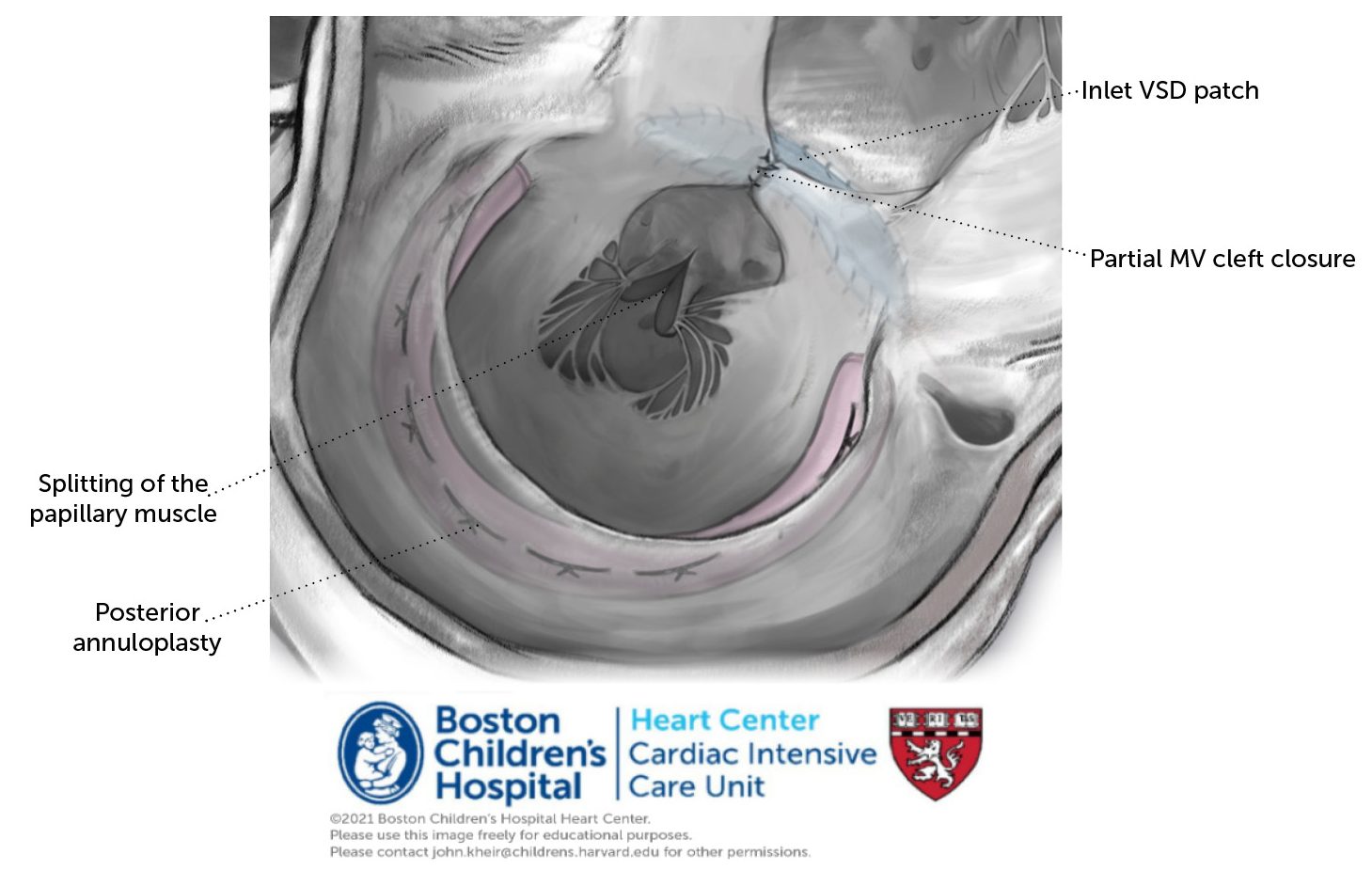 Repair of significant MV disease in CAVC requires addressing the above, and may include cleft closure, annuloplasty, chordal transfer and other interventions. At times, the MV must be replaced. Because of its technical complexity, the prevention of significant arterial hypertension is important and often several agents (e.g. vasodilator [particularly Nicardipine] and beta blocker) are used simultaneously. Restarting home ACEI dosing may help when applicable. In complex repairs, mechanical ventilation with NMB may prevent valsalva maneuvers, which cause a spike in ventricular pressure. Therapeutic anticoagulation is often used to prevent systemic thromboembolism.