Like every heart disease, HLHS exists along a spectrum of severity. Regardless of severity, though, patients require lifelong medical attention and nearly all require multiple surgical palliations, even those who end up with a biventricular circulation.

Importance of atrial septum in HLHS 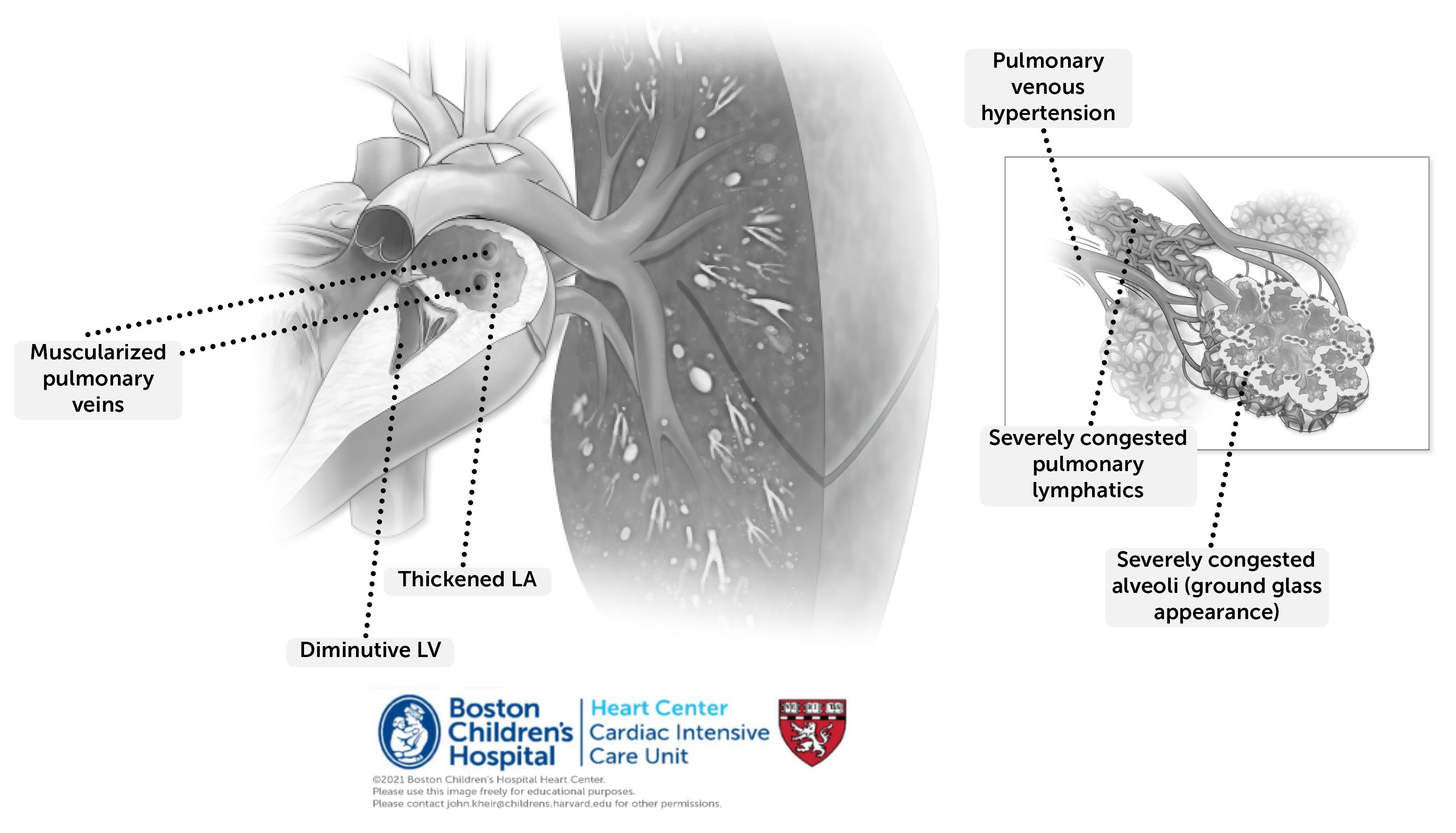 Anatomy. Patients with MS/AS most commonly have a left ventricle that does not reach the apex (i.e. non-apex forming). The supporting structures of the MV are often displaced towards the base of the ventricle (basally displaced) and are narrowly spaced (sometimes parachute), meaning that the leaflets are unable to separate from each other and open widely towards the apex of the ventricle. This creates the substrate for mitral stenosis. Similarly, the AV may be bicuspid, small, and stenotic, although it is common at birth for there to be little to no AV gradient at birth due to diversion of pulmonary venous return through the RV. The endocardium may be lined with EFE, limiting diastolic excursion and exacerbating restrictive physiology. 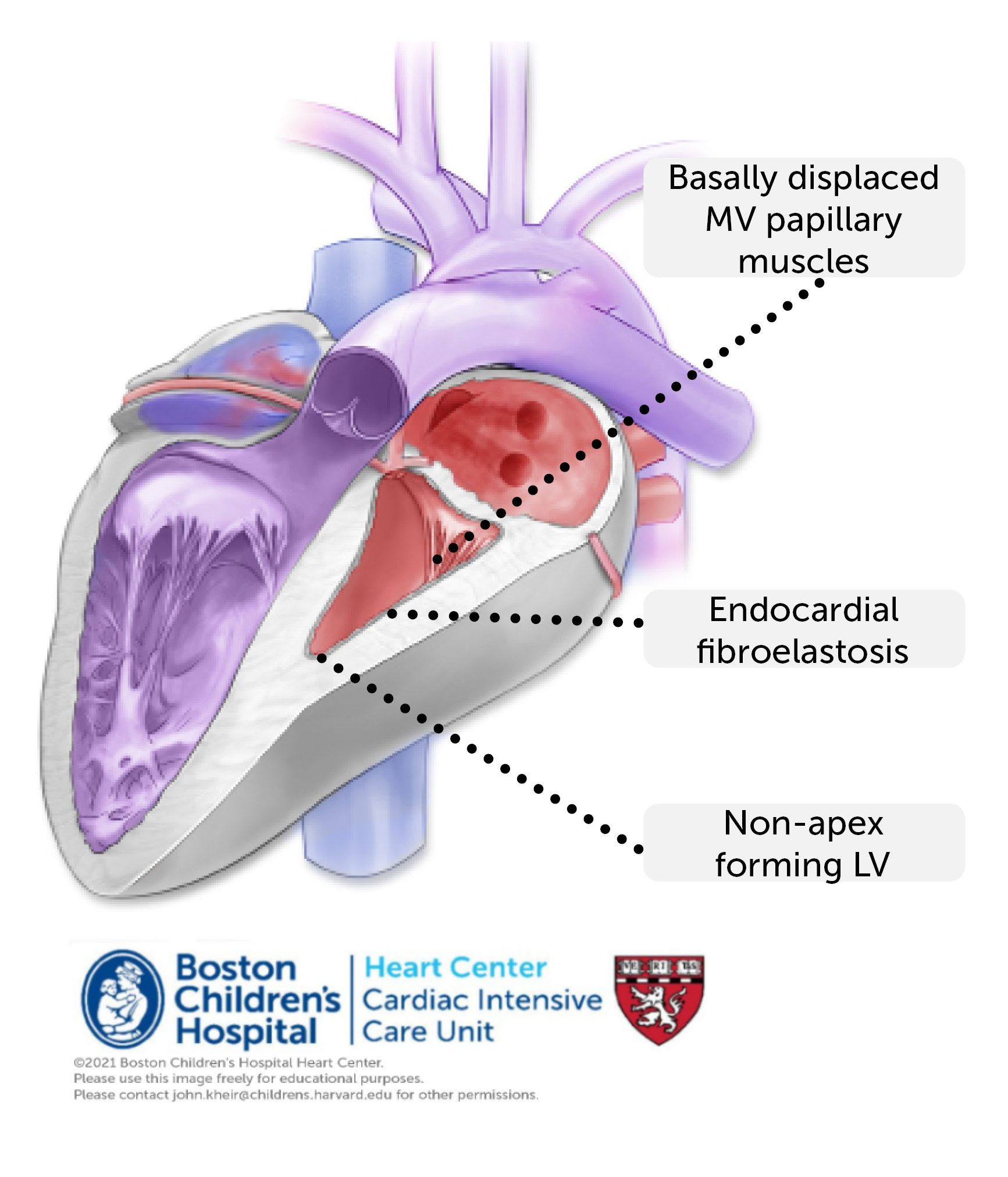 Physiology. The systemic circulation is PGE dependent. As detailed on the prior page, patients with a restrictive atrial septum may exhibit LA HTN, diminished pulmonary blood flow, hypoxemia, dead space ventilation, chronic lung disease, and lymphatic dysfunction. Otherwise, most patients with MS/AS are stable after birth. Absent lung disease, most patients have saturations in the 80s shortly after birth, rising to the mid-high 90s by 2-3 days of life (high Qp/Qs + low VO2 –> high SvO2 + SaO2). In this anatomy, the LV also ejects into the aorta, such that there may be pre-post ductal SpO2 difference. In most cases, patients are not tachycardic or tachypneic and able to take some PO. The timing of surgery is typically elective within the first week of life. Rarely, complications (e.g. IVH or prematurity) may require delay of S1P, in which case branch PAB is necessary.

Anatomy. Patients with AA and either MS or MA do not have the possibility of antegrade aortic flow. The LV is anatomically prohibited from contributing to the circulation and the circulation is PGE dependent. In most cases, the LV is extremely diminuitive. In the unique case of MS/AA, there is inflow and no egress of LV preload from the LV. This maintains a high ventricular pressure throughout the cardiac cycle such that fistulae between the LV cavity and the coronary circulation persist (normally they are present early in gestation and regress over time). In a subset of these cases, there is ‘dependence’ of the coronary circulation on the LV, at times even definitive proximal coronary ostial atresia. 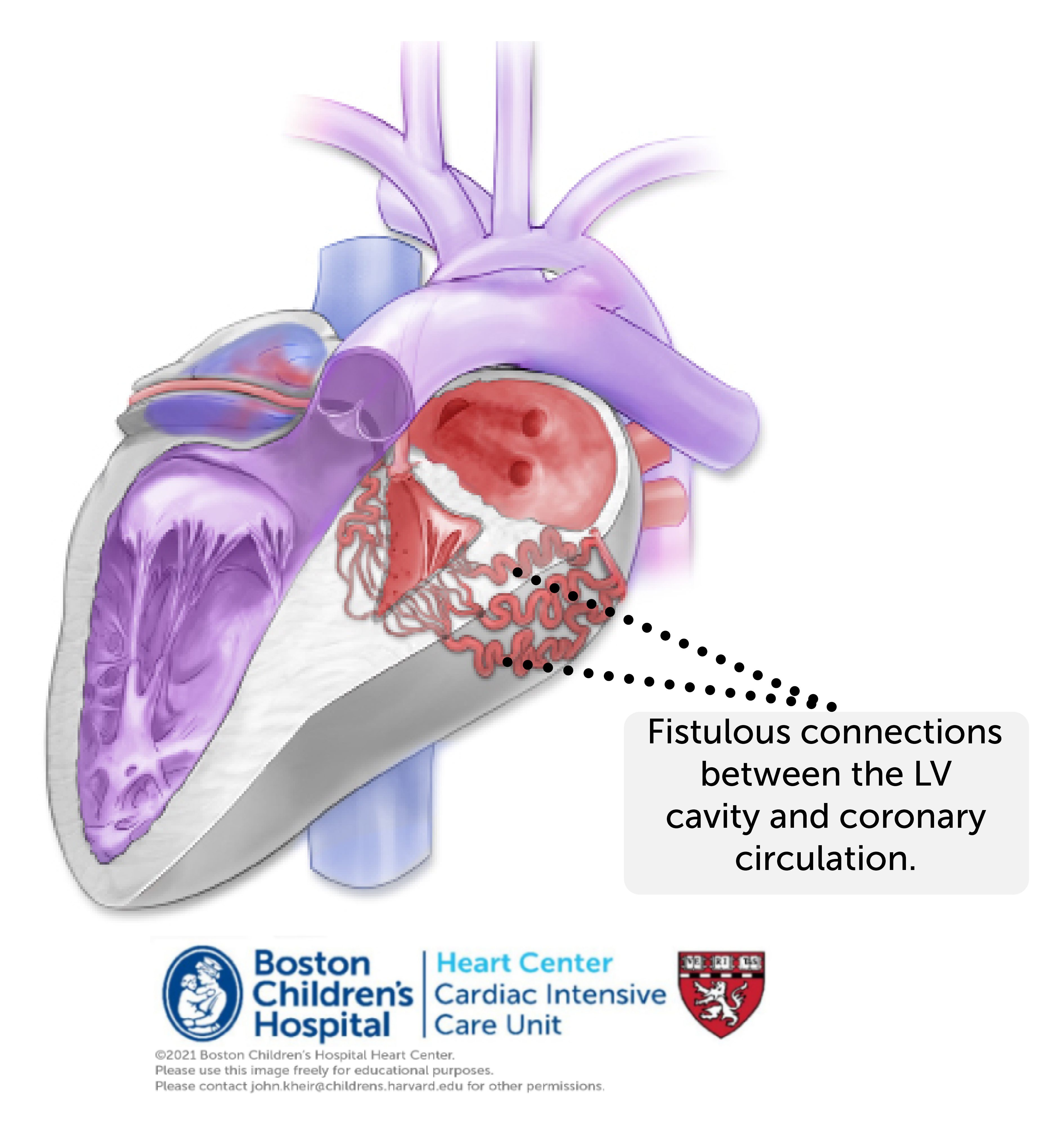 Physiology. The systemic circulation is PGE dependent due to aortic atresia. Most patients with MA/AA are stable after birth and follow a similar pattern of saturations in the mid-high 90s by 2-3 days of life with excellent peripheral perfusion (see prior page). The timing of S1P is typically elective within the first week of life. Patients with MS/ AA, however, may have LV-coronary fistulae or even coronary ostial atresia. In the latter case, the LV cannot be depressurized (e.g. by atrial septostomy) without causing coronary ischemia and the circulation may be quite unstable with increased troponin, EKG changes, or cardiac arrest. Rescue with VA ECMO may be ineffective in cases of coronary ostial atresia. Initial palliation on these cases is typically with a hybrid procedure, though in the absence of LV-dependent coronary circulation S1P may be pursued.