The morphology of the normal MV is elegant and complex. The annulus is normally saddle-shaped. The anterior leaflet is in fibrous continuity with the aortic valve. This leaflet is curved during systole: the base of the leaflet is almost in the base plane, angling apically where secondary chords attach (near the smooth-rough junction), and the free edge end of the leaflet almost parallel to the LV long axis; this establishes a widely patent LVOT. The supporting structures of the MV include a network of primary, secondary and tertiary chordae, which mostly attach to two widely spaced papillary muscles which are anchored ~2/3 the distance to apex and on the posterior and inferior walls (posterosuperior and anteroinferior papillary muscles). These muscles anchor the valve apically during ventricular systole, but also allow for maximal leaflet opening during ventricular diastole. Normally, blood passes from the atrium to the ventricle through the primary orifice of the valve between the free edges of the leaflets, with relatively little passing through secondary orifice areas (e.g. interchordal spaces). Unlike the TV, there are no attachments of the MV to the ventricular septum. 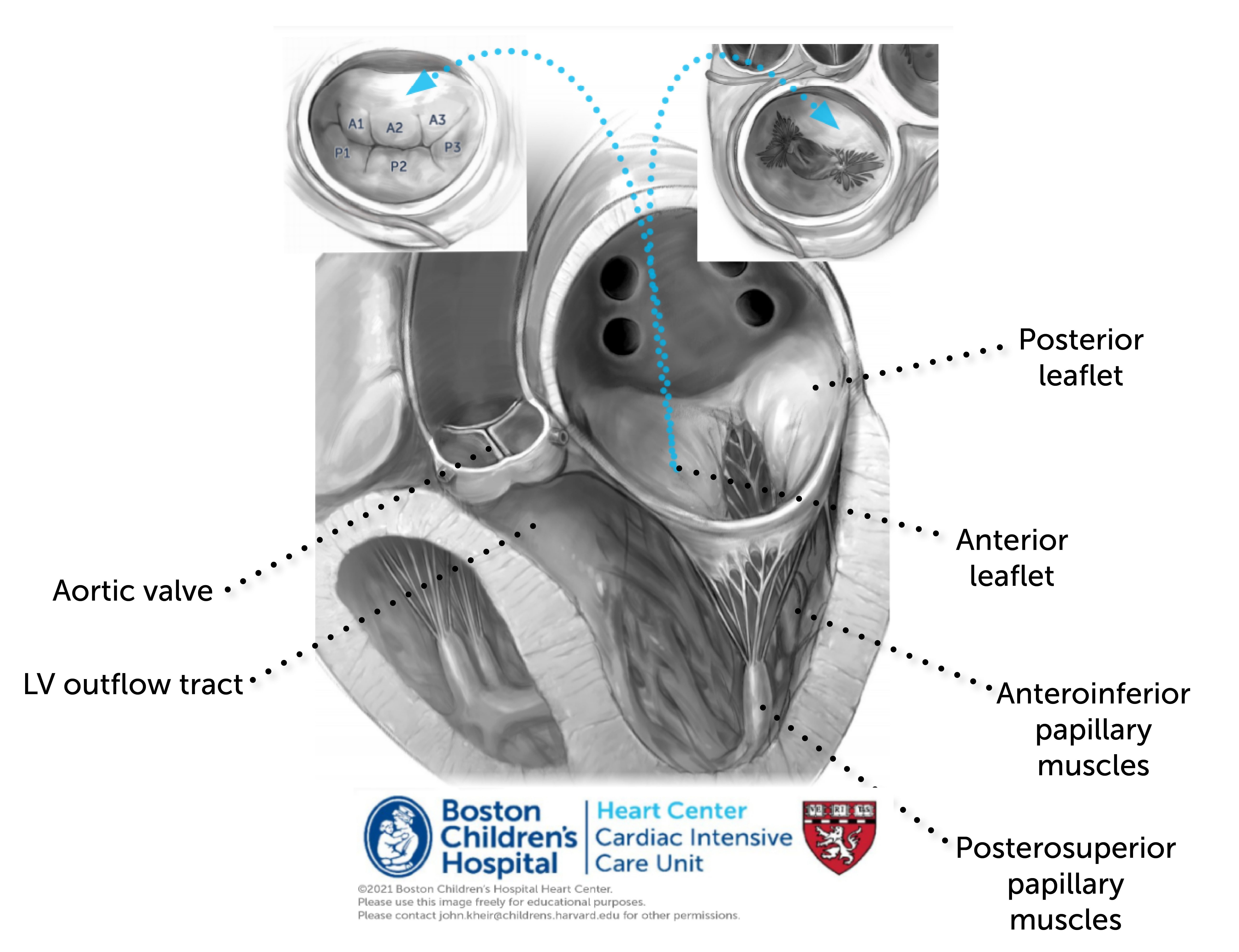 Mitral valve pathology can occur secondary to leaflet thickening, chordal fusion, or chordal malattachment, among others.

•Parachute mitral valve (or closely spaced papillary muscles). Normally, the mitral valve leaflets open widely into the LV, creating a widely patent orifice for mitral inflow. When the muscles are less-well spaced or anatomically fused (i.e. single papillary), anterior and posterior leaflets are hypomotile and do not separate fully, limiting the primary orifice area. Frequently associated chordal fusion limits secondary orifice area as an alternative egress. This narrows the MV orifice and may produce mitral stenosis. Over time, turbulent blood flow stimulates fibrosis of the leaflet and diminishes excursion further. Surgical approaches include thinning of the MV leaflets and chordae, splitting of papillary muscles, papillary muscle translocation, or the creation of neochordae that are more widely spaced. 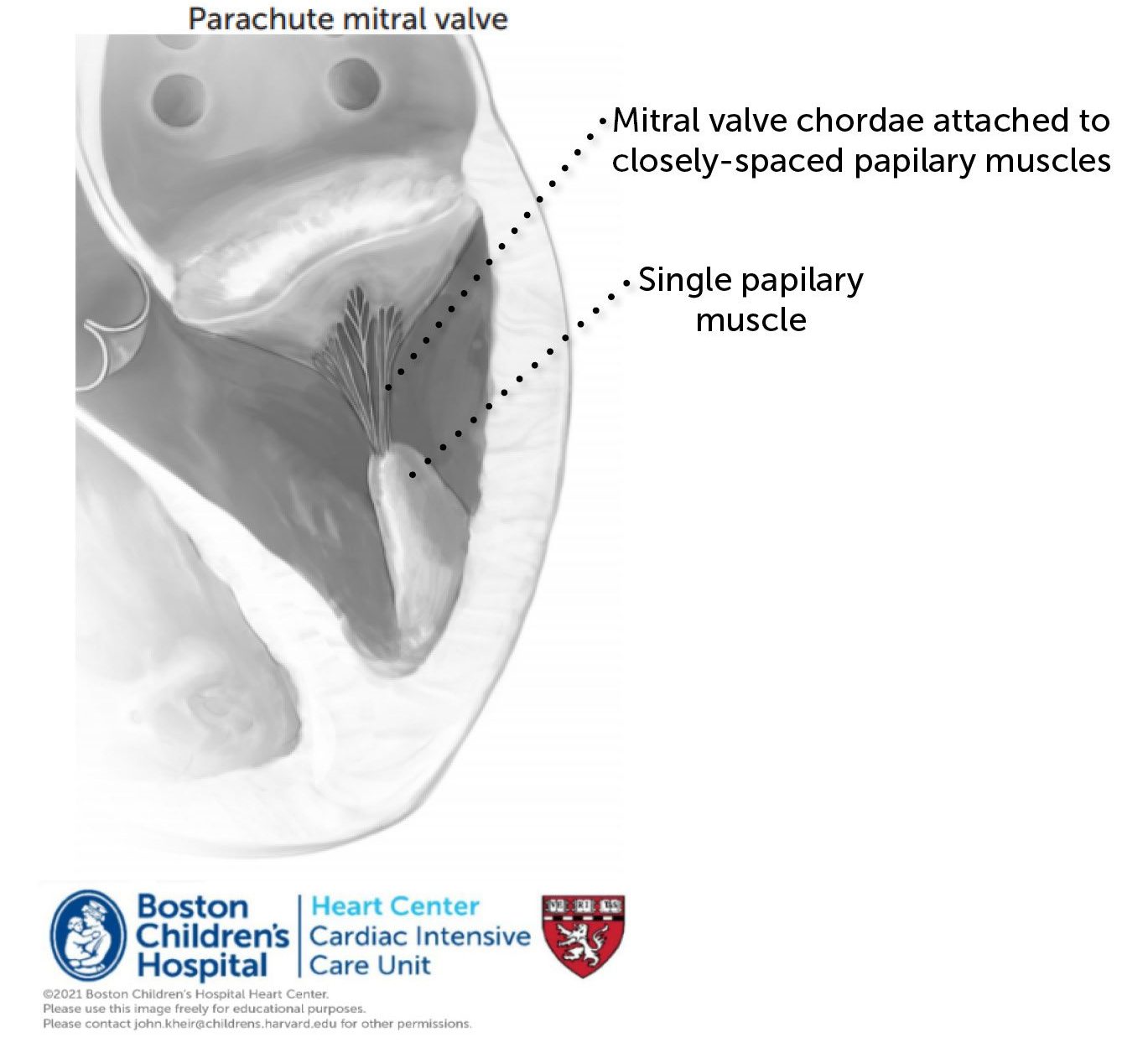 •Double orifice mitral valve. May occur in isolation or with a transitional or complete AVC. DOMV often exhibits two separate networks of supporting chordae. Often asymptomatic in isolation, DOMV can increase the complexity and risk of repair of AVC defects. Surgical approaches include the division of the fibrous ridge separating the two orifices or other approaches to valvuloplasty. 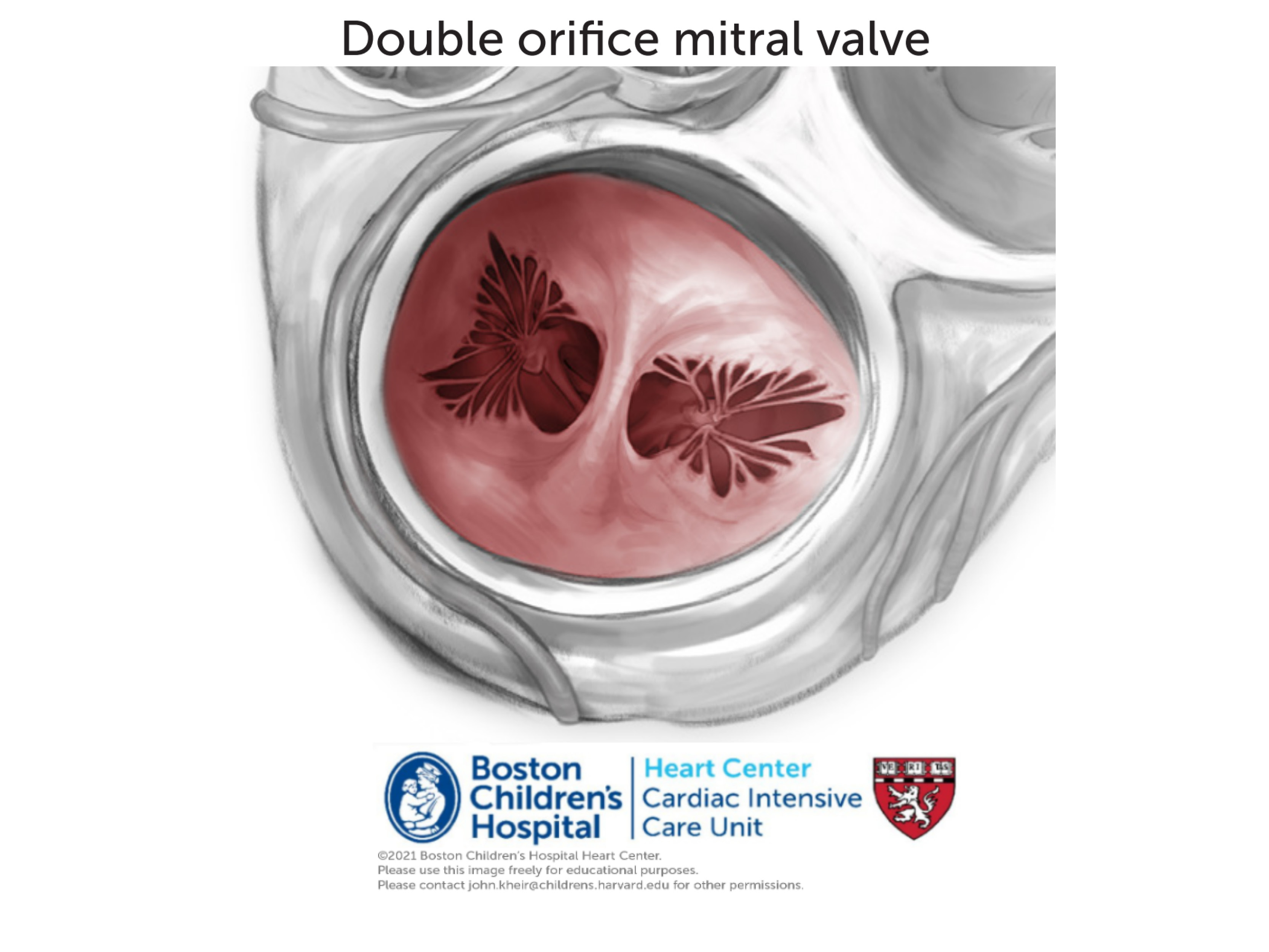