Anatomy. In critical PS, the TV is often mildly hypoplastic and the RV may be muscle-bound and restrictive, but there is at least a trickle of antegrade PBF through the PV, distinguishing it from PA/IVS. Critical PS and PA/IVS are prognostically different in that nearly all patients with critical PS are able to achieve a biventricular circulation in the neonatal period, which is not true for all patients with PA/IVS. In PA/IVS, the anatomy of the TV, RV and PV may vary from mildly to severely hypoplastic. Interestingly, severe pulmonary artery hypoplasia is uncommon. If the TV Z score is <2.5 (a surrogate for RV size and function), the likelihood of achieving a biventricular circulation in the newborn period is low. In cases of severe RV hypoplasia, the coronary circulation may be RV-dependent. 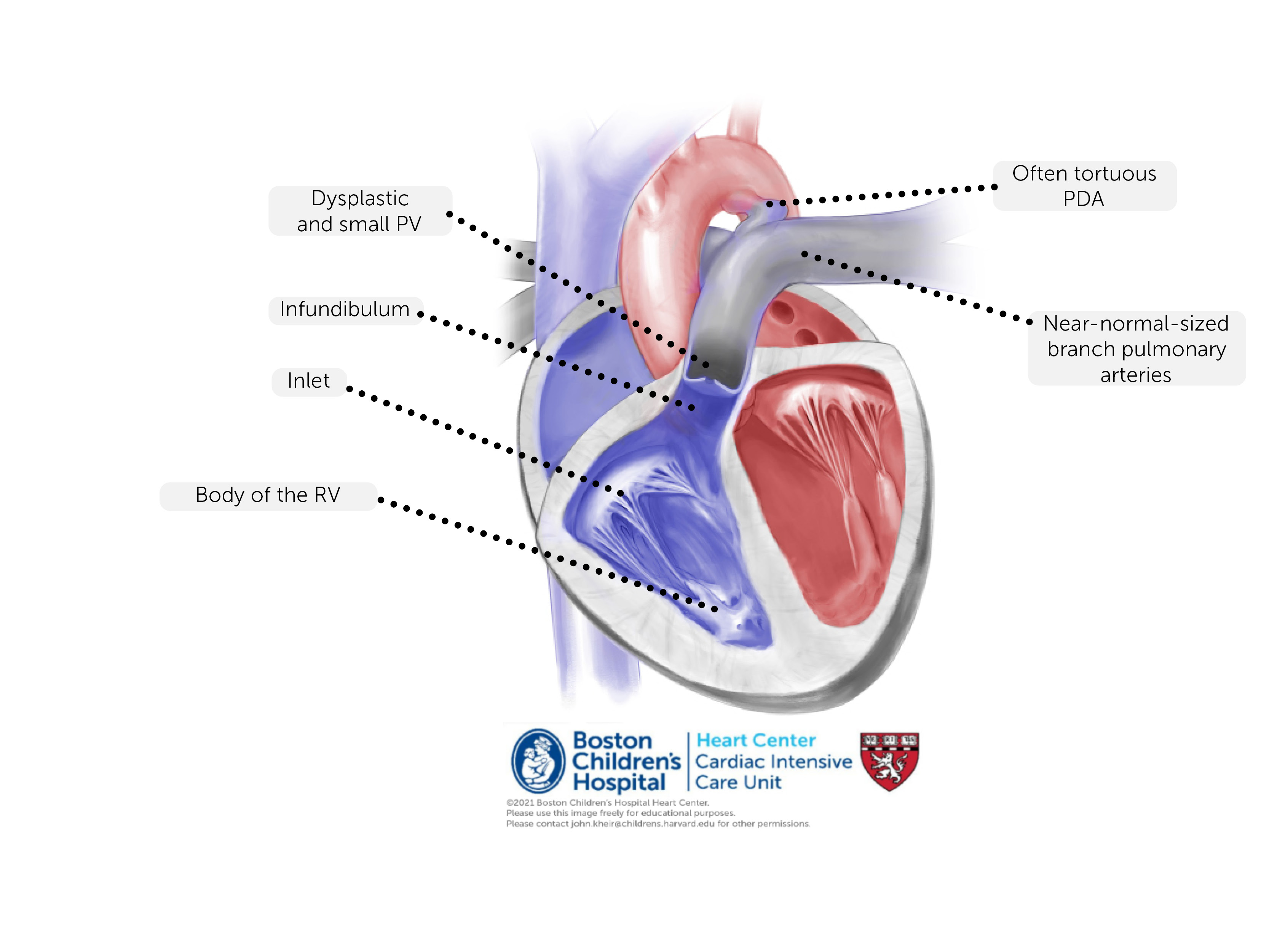 Physiology. Patients with both critical PS and PA/IVS are PGE-dependent after birth (i.e. discontinuing PGE leads to critical hypoxemia); a patient with a high degree of pulmonary stenosis who does not become hypoxemic has severe PS rather than ‘critical’ PS. Hypoxemia occurs due to right to left atrial level shunting due to restrictive RV physiology which causes decreased PBF due to right to left atrial shunting. This diminuition of PBF leads to decreased LA return and encourages right to left atrial shunting. In most cases, following echo confirmation, the first step is most commonly a cardiac catheterization for coronary assessment and balloon valvuloplasty of the PV. 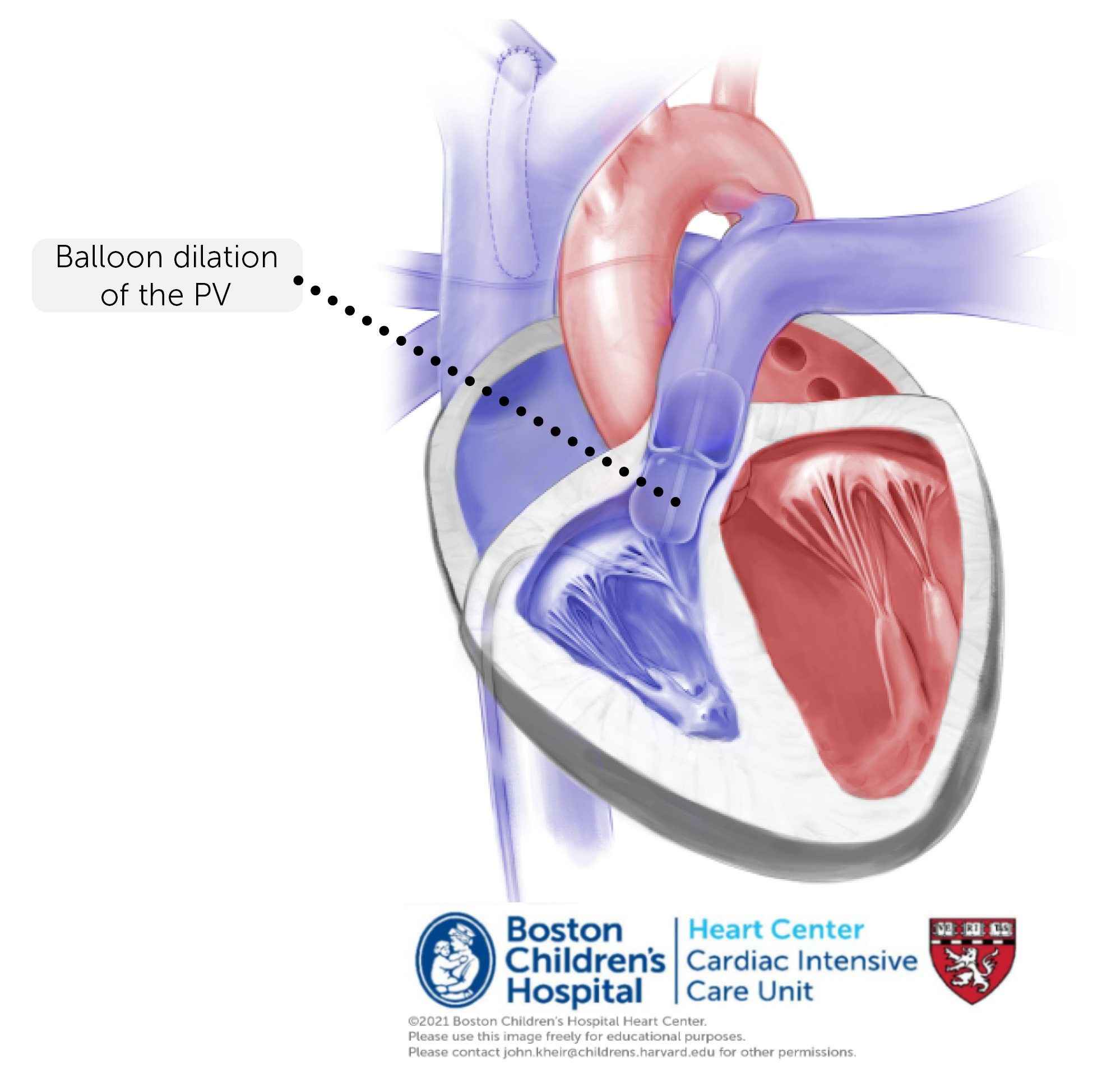 Intervention. The initial intervention in most cases is cardiac catheterization. When there is pulmonary atresia, it is important to ensure that the coronaries are not ‘dependent’ on the RV, i.e. that there is not coronary ostial atresia and that the majority of flow to all vascular territories occurs antegrade via the aorta (see next page). If this is excluded, the PV may be traversed using radiofrequency ablation and balloon dilated (typically to 100-120% of annular dimension).

Post-intervention considerations. Once the PV is opened, PBF may proceed antegrade via the RV or via PDA. However, in many cases, the RV stroke volume gradually increases with time as end diastolic volume increases. If hypoxemia occurs once PGE are discontinued, they are typically restarted for several more days. Saturations may improve over days to weeks. Typically, if SpO2 decreases much below 70% after several trials off PGE, it is common to elect for PDA stenting (or BTS) placement to augment PBF.

Subsequent hospitalizations. In some patients, the RV is adequate to support the circulation in the newborn period (and is the case in nearly all patients with critical PS). In these cases, the PV must be monitored for stenosis and regurgitation and may require reintervention over time. In patients requiring PDA stenting or BTS, PBF may be provided following the development of hypoxemia (typically around 4-6 months) via either BDG with augmentation of the RV (muscle bundle resection, PVplasty) to achieve a 1.5 ventricle repair or by subsequent 2V repair.