Anatomy. DORV with subpulmonary VSD is akin to dTGA/VSD except that the pulmonary valve is aligned with the RV with a complete subpulmonary conus (which also prevents the PV from having fibrous continuity with the MV). This defect is commonly referred to as Taussig-Bing in honor of the authors of its original description, though the original description specifically also exhibited double conus and side by side great arteries. Frequently, associated anomalies such as aortic coarctation, arch hypoplasia, subaortic obstruction are described on the following pages. 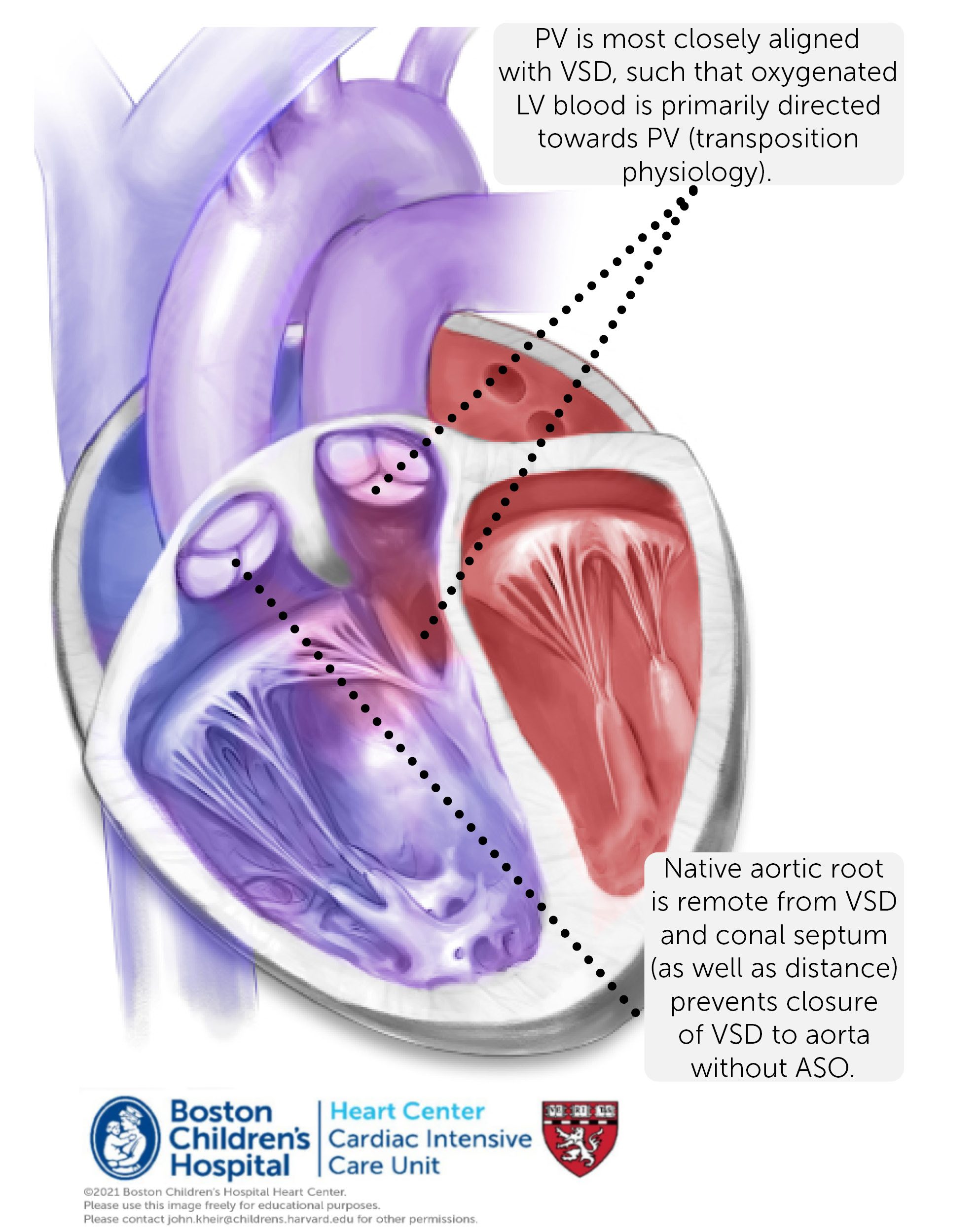 Physiology. Because the VSD is primarily related to the PV there is typically transposition physiology (PA > Ao saturation). However, given the often elevated Qp/Qs (given the propensity for some degree of subaortic obstruction), significant hypoxemia is rare after birth except in cases of an intact atrial septum.

Repair. The surgical repair of DORV/subpulmonary VSD depends primarily on the size of AV, PV, and conal structures that may obstruct outflow. In most cases, the PV is of sufficient size and is suitable for ASO and closure of the VSD to the neo-AV (shown). In cases of severe arch hypoplasia (associated with severe subaortic conus), the aortic arch must also be reconstructed and RVPAC inserted for PBF (see next page). 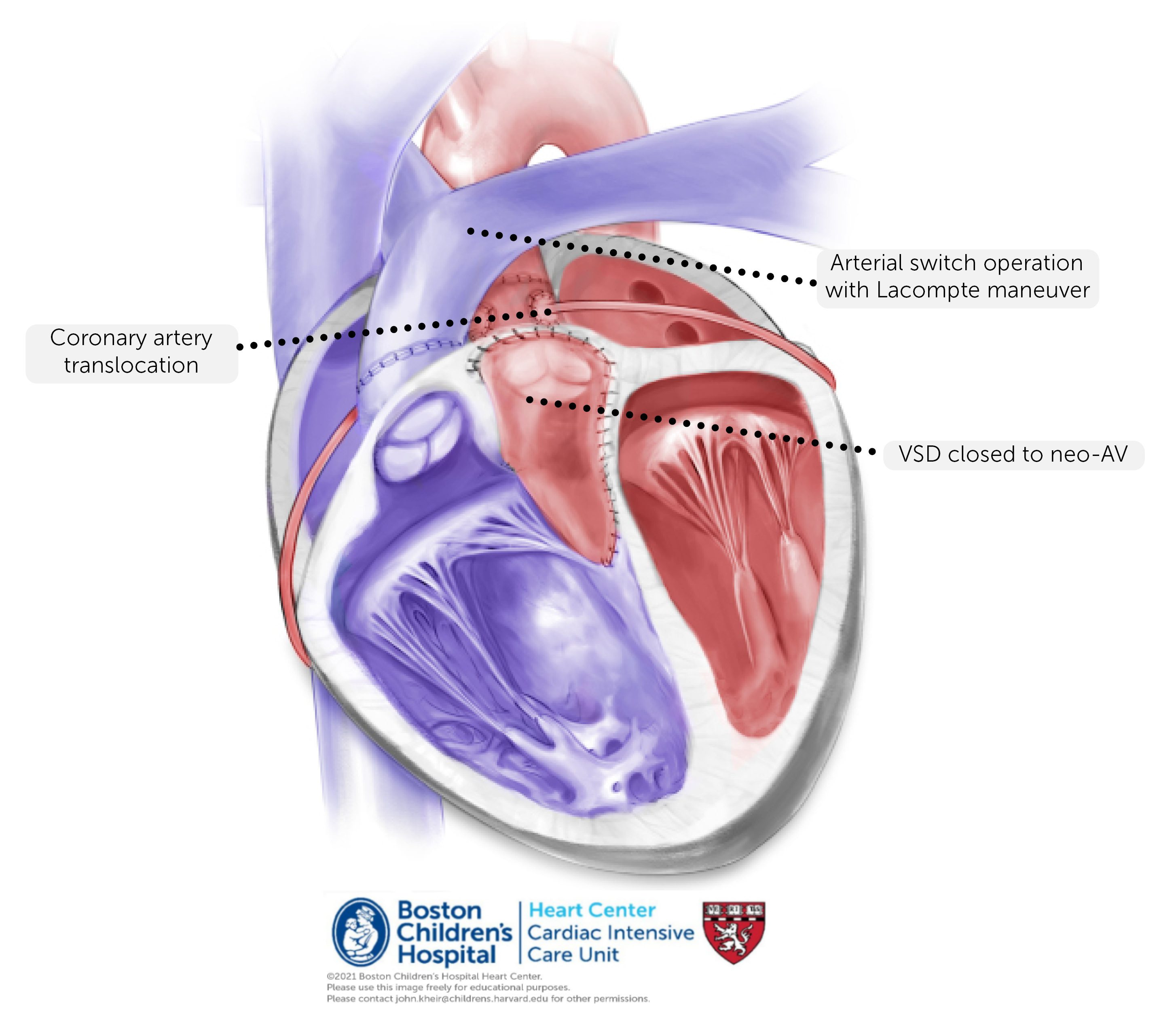 Postoperative considerations. The primary considerations following biventricular repair of DORV/subpulmonary VSD include those associated with ASO and VSD closure, including coronary ischemia. There is risk for postoperative junctional rhythm and heart block, for restrictive ventricular physiology, and for residual VSD. Patients with a preoperatively borderline aortic arch should be monitored for aortic arch obstruction.

Anatomy. In this relatively common variant of DORV/subaortic VSD, there is a prominent subaortic conus with anterior deviation of the conal septum that obstructs aortic outflow. This may cause aortic arch hypoplasia and isthmic coarctation, resulting in PGEdependent systemic blood flow after birth. 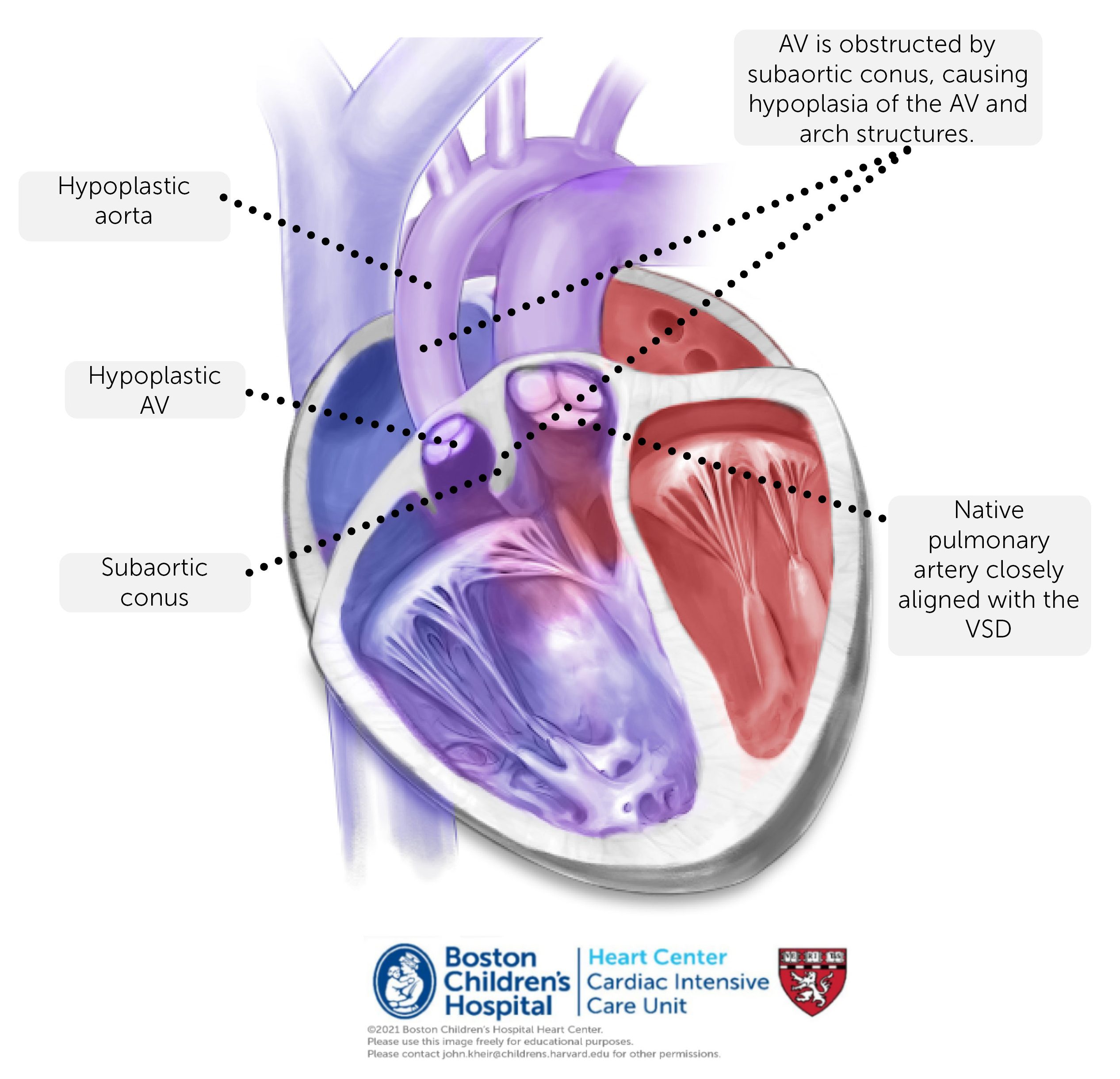 Physiology. In the setting of severe subaortic obstruction, the physiology is more akin to single ventricle physiology than it is to transposition physiology. Relative to straightforward TaussigBing (absent subaortic obstruction), the PA saturation is decreased (approximating Ao saturation more closely) by shunting of deoxygenated blood from the RV into the PA. PDA flow is often right to left (PA to aorta) due to arch hypoplasia but PBF is typically abundant, such that aortic saturation is typically acceptable. However, the degree of aortic arch obstruction typically mandates intervention in the neonatal period.

Repair. The surgical repair of DORV/subpulmonary VSD with subaortic obstruction requires ASO and reconstruction of the aortic arch. PBF is typically achieved by RVPAC rather than anterior PA translocation (as would be typical in ASO), as the would-be PV (i.e. native AV) is often prohibitively small and obstructed. Clearly there is a spectrum of subaortic conus such that sometimes the RVPAC can be avoided and ASO completed as shown. 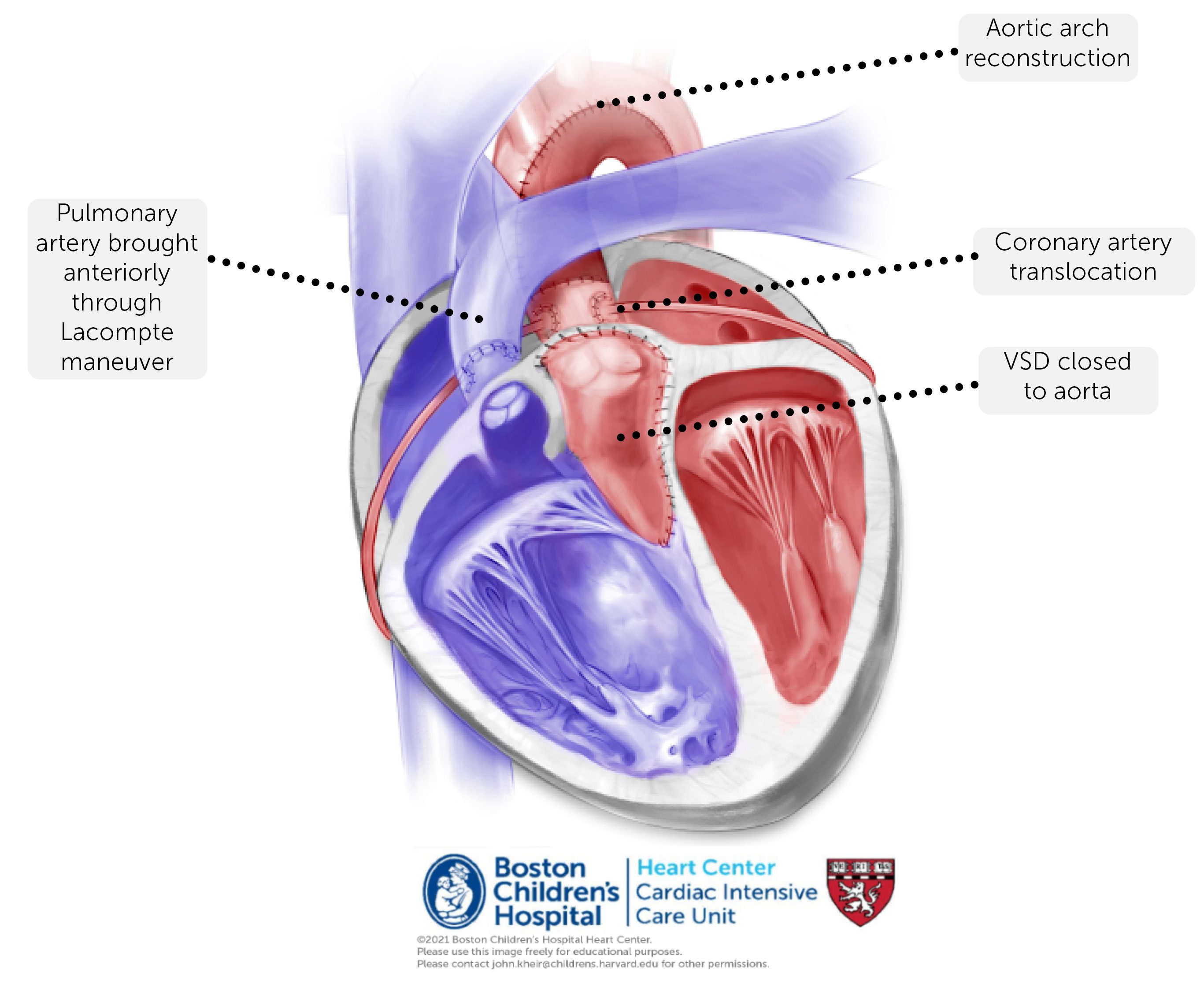 Postoperative considerations. The primary considerations following repair include bleeding (due to extensive arterial suture lines), evaluation of the adequacy of the coronary transfer (as with all ASO), as well as heart block and arrhythmias. The presence of LA HTN should prompt evaluation for residual VSD.