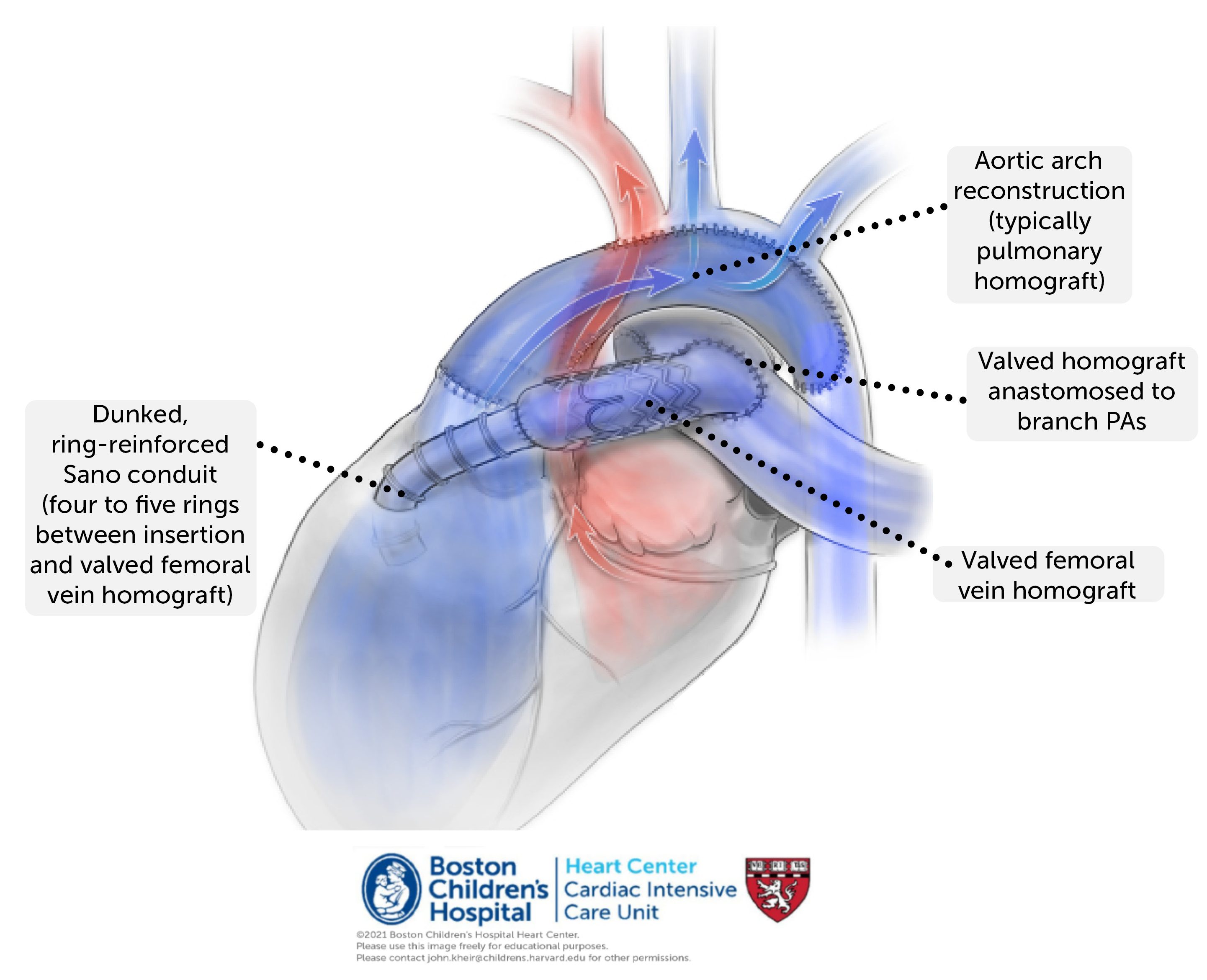 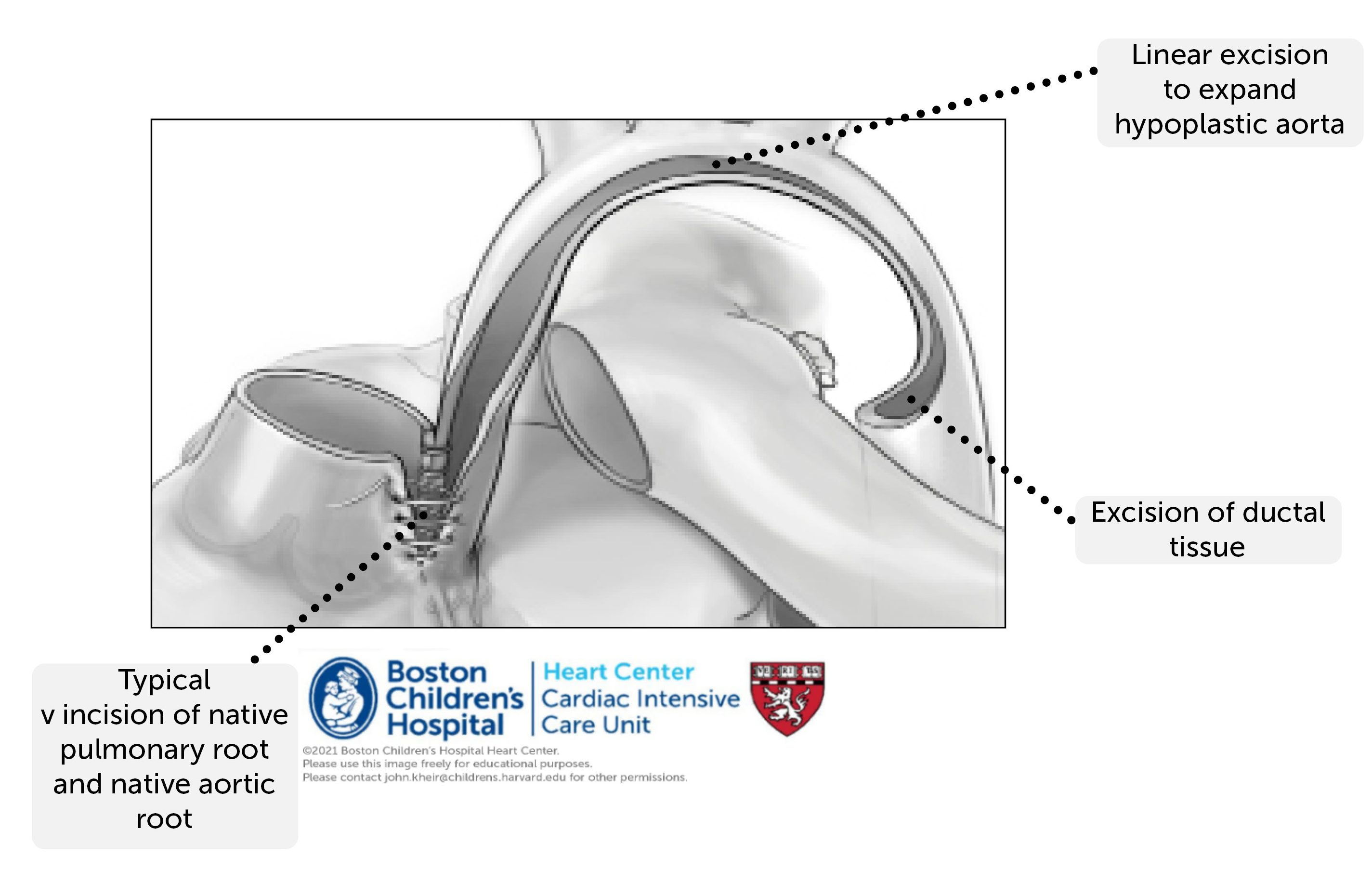 Procedure. The stage 1 palliation (also known as Norwood procedure) is a major procedure that includes several components. (1) Systemic blood flow is provided from both the RV and LV (except when there is aortic atresia) using an anastamosis called the DKS (Damus-KayeStansel). This includes transection of the MPA from the pulmonary root and side-to-side anastamosis of the aorta and pulmonary roots. In cases of AA (associated with a 2-3 mm aorta), the aortic root may also be incised down to the coronary ostium for direct anastamosis to the PA (so-called V incision). In some cases, the native ascending aorta may be patch augmented (on the side opposite the root incision) to enhance coronary perfusion. (2) The PDA is ligated, ductal tissue resected, and the aortic arch is reconstructed, often with homograft material. (3) In almost all cases, a complete atrial septectomy is performed. This is important as it obviates the possibility of isolated LA HTN. (4) Pulmonary blood flow may be established using a Sano conduit as shown. The typical Sano conduit is composed of ring-reinforced GoreTex tube that is ‘dunked’ into the RV infundibulum to minimize the risk of obstruction to pulmonary blood flow. Recently, we have modified the Sano into a ‘composite Sano’ that contains a distal valved femoral vein homograft. This minimizes pulmonary regurgitation and also may augment the distal anastamosis onto the PAs.

Procedure. The stage 1 palliation may be performed as described to the left (including DKS, aortic arch reconstruction, and atrial septectomy) but with a different source of pulmonary blood flow. Rather than a Sano shunt, a modified Blalock-Taussig shunt may be used. Typically, a 3 or 3.5 mm GoreTex tube graft is anastamosed onto the innominate artery (or more distally onto the subclavian artery) and the distal end anastamosed to the RPA (typically). 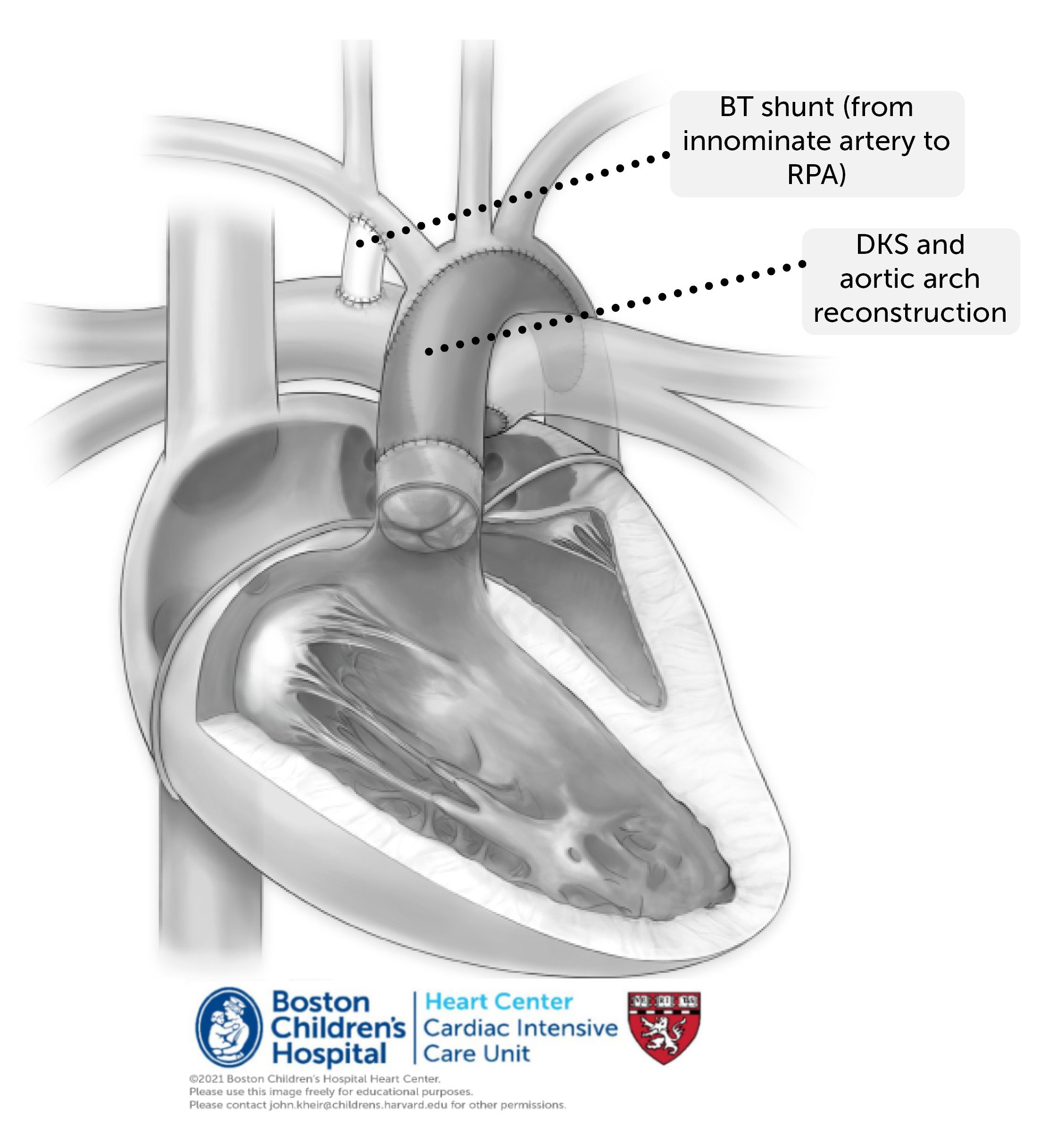 Comparison of Sano and BTS

Outcomes between S1P performed using a Sano shunt vs a BT shunt were compared head-to-head in the landmark Single Ventricle Reconstruction trial (NEJM, 2010). The major benefits to the Sano shunt are improvements in perioperative stability and therefore (at some centers) a lower incidence of postoperative cardiac arrest and improved early survival, although this survival advantage was not significant at 1 year followup. The major benefits to the BTS are improved PA growth (and fewer interstage interventions on the PAs) and lack of RV incision. Generally, there is a tension between providing increased PBF in the newborn period to augment PA growth (whether by BTS or by larger Sano conduit) and ‘stealing’ from the systemic circulation in the newborn period, increasing the early risk of acidosis, hemodynamic instability, and end-organ injury (e.g. NEC).

2017, JTCVS – RVPAS to right of aorta may decrease shunt revisions

2012, Anesth Analg – Mathematical modeling of DO2 and QpQs