Anatomy. dTGA/VSD/PS represents a less common variant of dTGA/VSD in which, in addition to a rotational defect which aligns the PA with the LV and the aorta with the RV, conal septum is posteriorly malaligned causing a variable degree of hypoplasia of the PV and MPA. 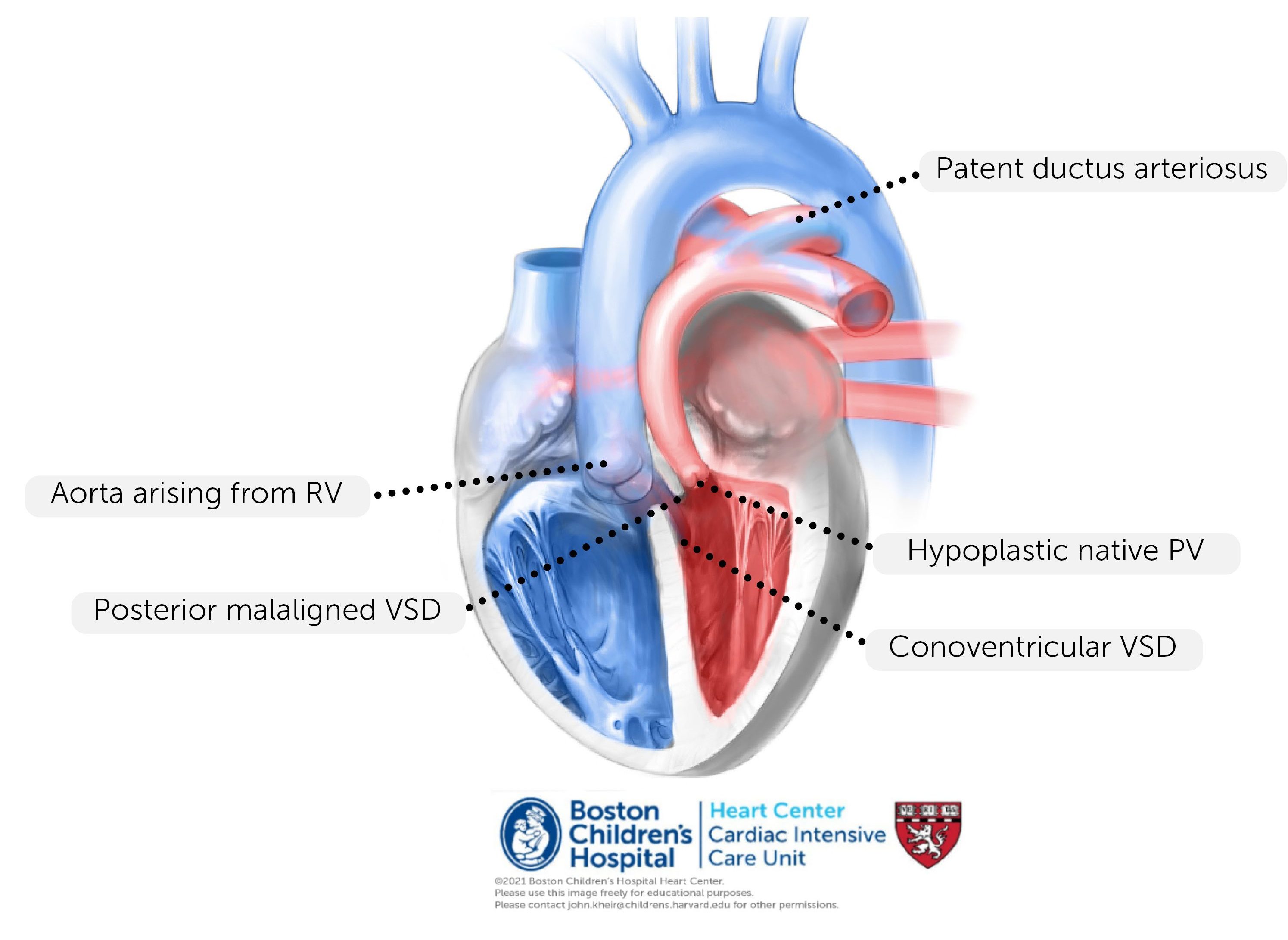 Physiology. As with all forms of dTGA, there is transposition physiology (PA>Ao saturation) when atrial and ventricular situs are normal; deoxygenated blood is recirculated to the body and oxygenated blood is recirculated to the lungs. The presence of VSD combined with PS creates shunting of oxygenated blood from the LV through the VSD and into the aorta. However, the primary limitation to systemic oxygenation is ‘effective’ (i.e. deoxygenated) pulmonary blood flow. In many cases, the degree of PS is significant enough that there is ductal-dependent pulmonary circulation (essentially TOF physiology combined with transposition physiology). If the PS is mild and the PV is suitable to serve as the neo-AV, ASO is (uncommonly) performed in the newborn period. Otherwise, a temporizing procedure (e.g. PDA stent or BTS) may be necessary to relieve hypoxemia in the newborn period.

Repair. The repair of dTGA/VSD/PS depends primarily on (1) the suitability of the PV to serve as the neo-AV (defined by the size and function (i.e. leaflet thickness and mobility) of the native PV and the degree of subvalvar obstruction) and (2) the proximity of the native AV to the VSD. If the native PV and LVOT are suitable for the systemic circulation, an ASO can be performed with resection of subpulmonary conus. Otherwise, the native AV will remain the AV and biventricular repair is performed either via Rastelli (direct baffling of the VSD to aorta) or the more involved Nikaidoh procedure. 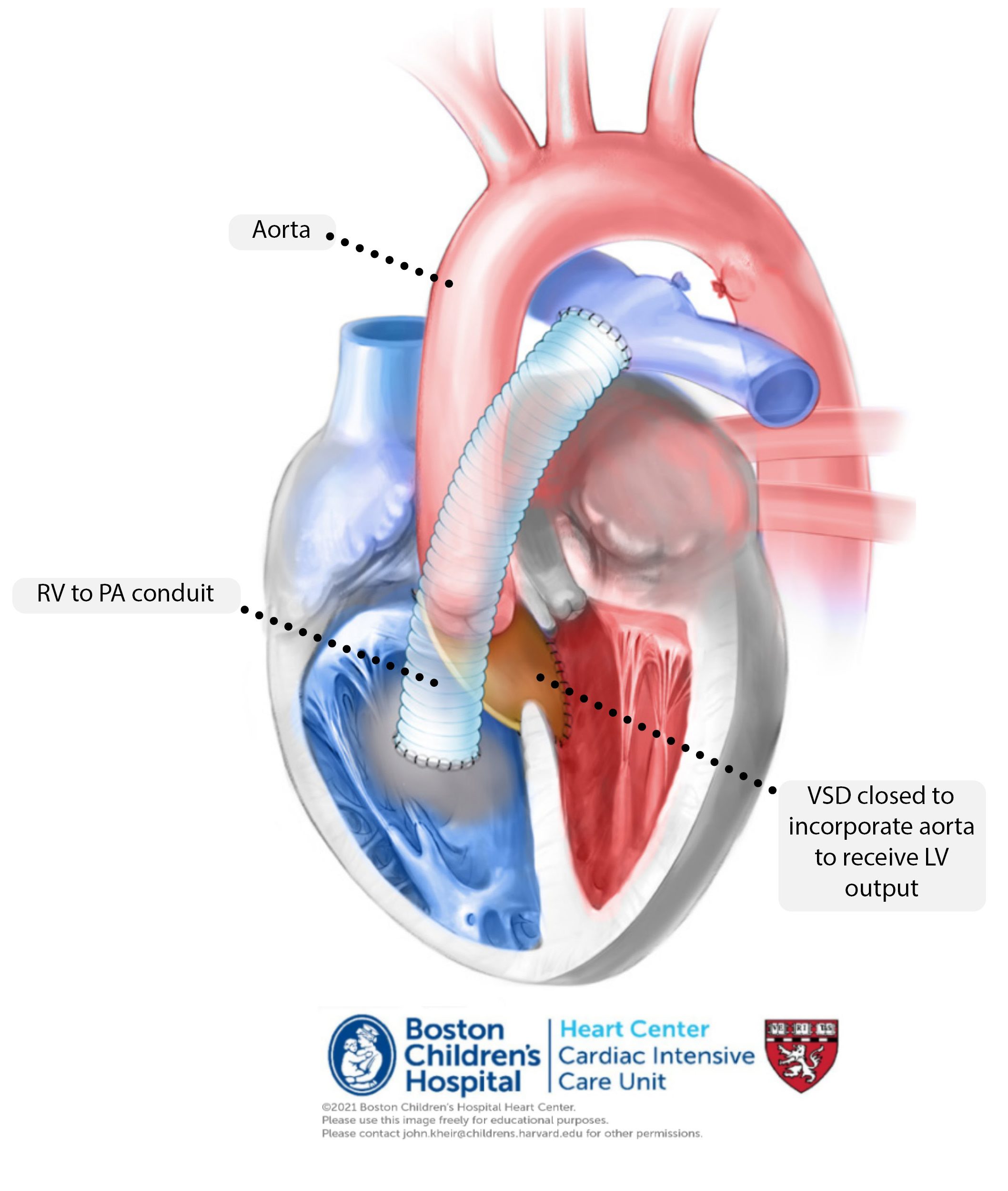 The Rastelli procedure involves patch closure of VSD with incorporation of the aorta on the left side of the circulation. Of importance is the geometry of the LVOT when this is performed. While still somewhat subjective, the pathway from the LV apex to the AV must be sufficiently wide and straight in order to avoid significant LVOTO. At times, the VSD can be extended apically to straighten and enlarge this pathway. The dimensions of the patch must be optimal – excessively large patches may behave as an aneurysm and create RVOTO. Once this is performed, the ASD is typically subtotally closed and an RVPAC is placed. Postoperative considerations. The primary considerations following Rastelli include (1) residual VSD (monitor by post-CPB TEE, stepup in RA-PA saturations, and elevated LA pressure), (2) restrictive LV physiology given the often large VSD patch, (3) LVOTO or AI due to altered conformation of the LVOT and AV annulus, and (4) the possibility of heart block and/or junctional rhythm. If none of these complications are present and the preoperative state was favorable, postoperative extubation may be within 24 hours.

Postoperative considerations. The primary considerations following Rastelli include (1) residual VSD (monitor by post-CPB TEE, stepup in RA-PA saturations, and elevated LA pressure), (2) restrictive LV physiology given the often large VSD patch, (3) LVOTO or AI due to altered conformation of the LVOT and AV annulus, and (4) the possibility of heart block and/or junctional rhythm. If none of these complications are present and the preoperative state was favorable, postoperative extubation may be within 24 hours. 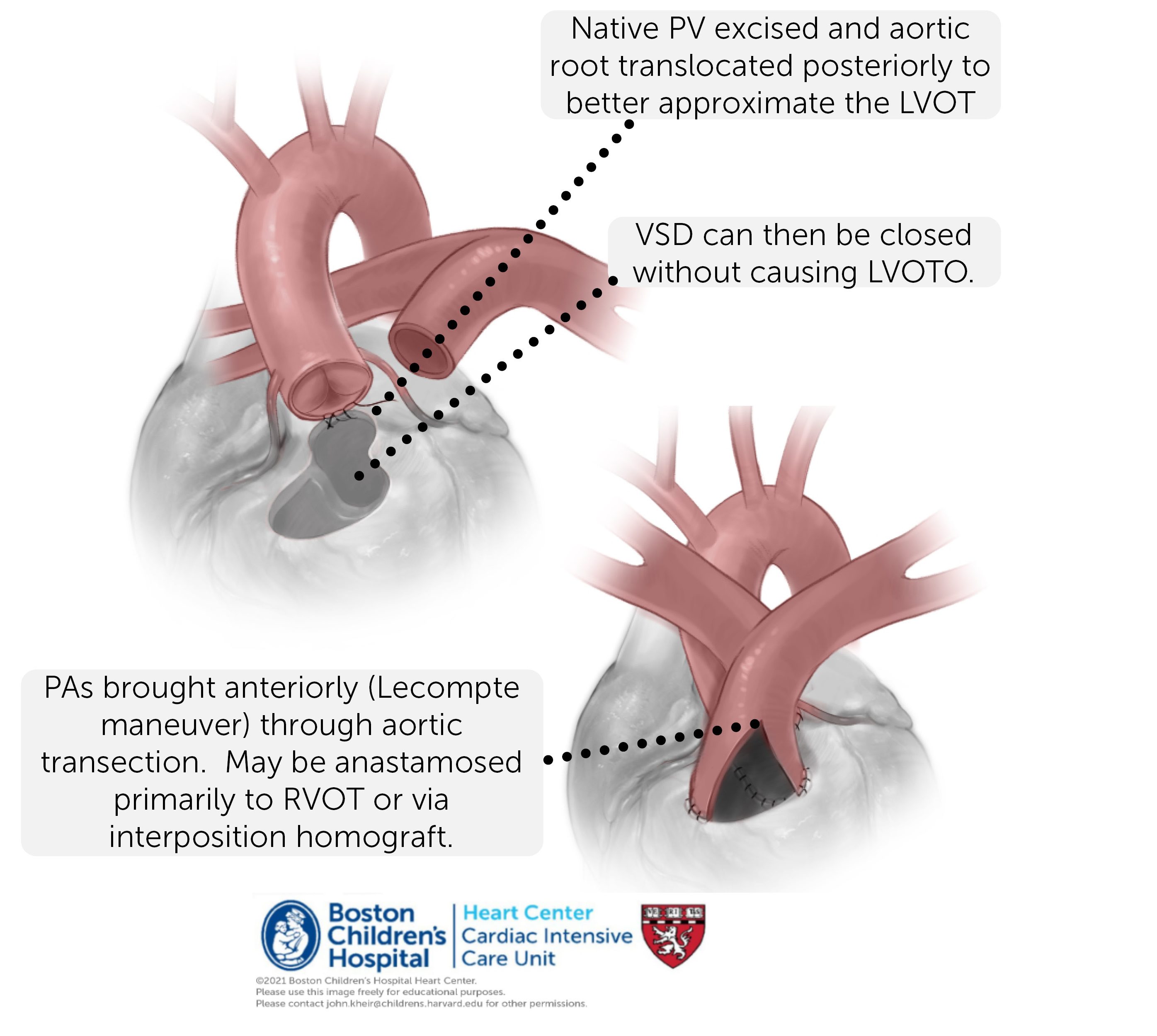 Repair. A posterior aortic root translocation (known as Nikaidoh procedure) is performed when the native PV is unsuitable for use as the neo-AV (see last page) and when the aorta is too remote from the VSD for a Rastelli closure of the VSD. In this procedure, the aortic root is excised from the RV and translocated posteriorly over the LV and sutured into the LVOT from which the PV and subpulmonary conus are resected. The coronary arteries may be left in situ or removed and reimplanted into a rotated aortic root. The aorta is often incised and foreshortened, and the PAs are brought anteriorly (Lecompte maneuver). The VSD is then closed. RV-PA continuity can be accomplished using a pulmonary homograft (i.e. conduit); alternatively, if the PAs can be adequately mobilized anteriorly, they can be primarily anastamosed using the REV procedure as shown.

Postoperative considerations. The primary considerations following Nikaidoh including the risks of bleeding due to the extensive aortic suture line and the risk of heart block given the excision of conal septum. Posterior translocation of the aorta may compromize coronary perfusion, which should be closely monitored (ST segment changes, ventricular arrhythmias, new onset heart block). The risk of LCOS is significant due to the duration of cross-clamping and the need for inotropic support is common. Additionally, the LV may be anatomically restrictive in this anatomy such that LA HTN may be present, especially so in the setting of a residual VSD 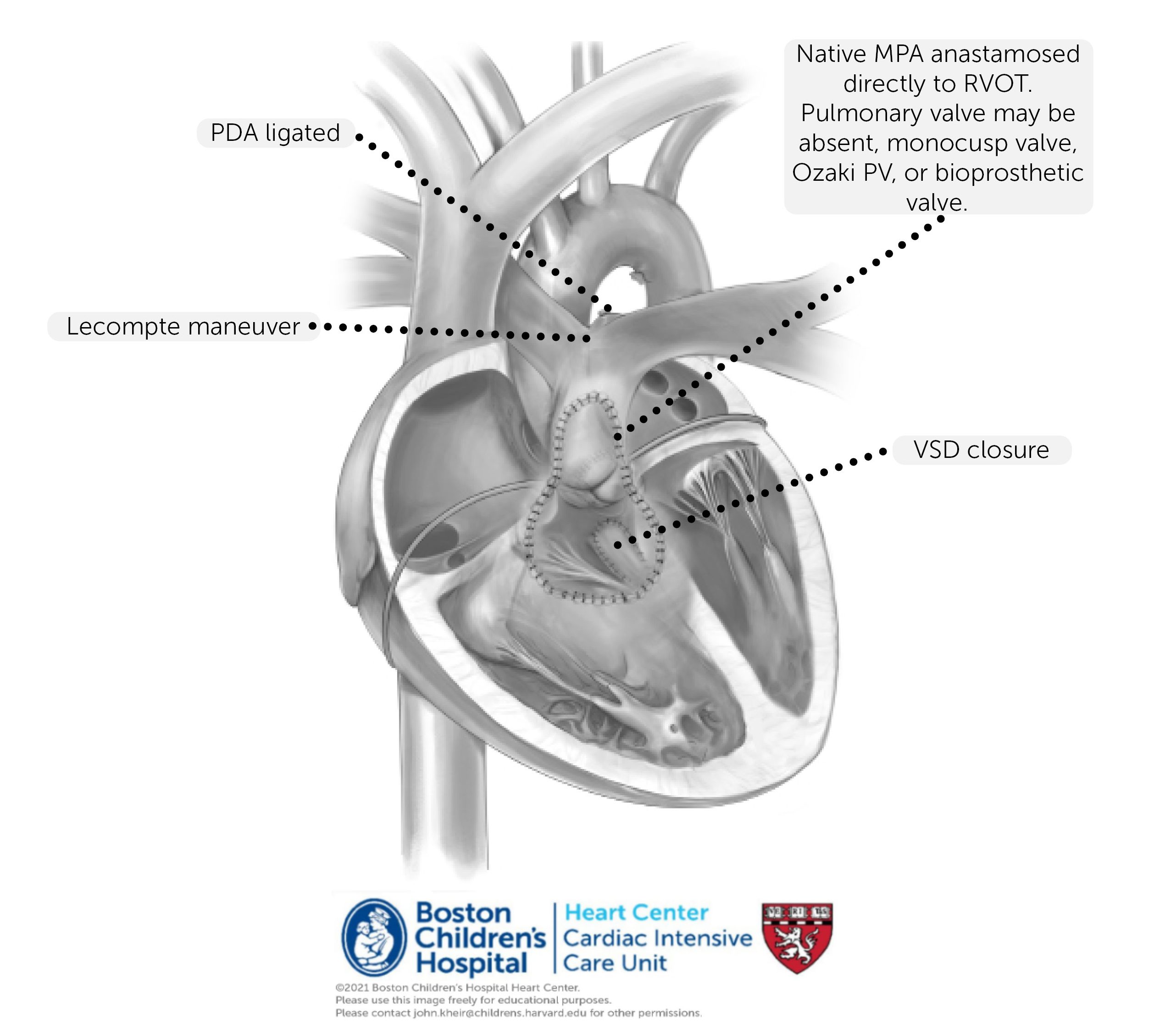 Repair. The REV procedure (abbreviation for the french term ‘reparation al’etage ventriculaire’) is a modification of the Rastelli procedure that includes (among others) a revision to the RVPA connection that is typically what is referred to as the ‘REV’. Specifically, instead of placing a RVPA homograft conduit, the posterior edge of the native MPA is anastamosed to the native RVOT following a Lecompte maneuver. The anterior aspect of the MPA and infundibulum are covered with a patch. The original description included a monocusp pulmonary valve. Because this lacks durability, this may be replaced by a bioprosthesis or Ozaki in the pulmonary position.

Postoperative considerations. The primary considerations following the REV are typically primarily those of the Rastelli or Nikaidoh (or other dominant procedure). The REV may be complicated by branch PA obstruction and therefore RV failure (if severe), and some degree of PR. In some cases, there is restrictive RV physiology due to the VSD patch and infundibular incision.